Despite a disorganised line up, disparities in time allotments for early performers and a slew of band changes, both artistes combined to treat the fair-sized crowd to a enjoyable, though abbreviated set.

With the Palm Beach Police eager to pull the plug in keeping with to county regulations, Cocoa Tea was introduced to a loud roar from an audience that was starving for quality entertainment. He did not disappoint and armed with his smooth vocals he delivered his first two songs with aplomb.

However, as he was about to delve into another delivery, he informed the crowd that he was only allotted 10 minutes to perform, the announcement did not go over well with the audience. 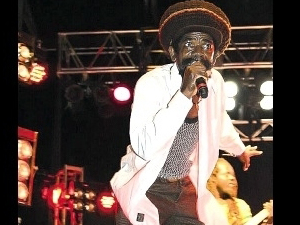 However, he pulled off a coup when he chimed, “Only Cocoa Tea can do it, call the Fireman pan stage”.

Aware of the time constraints, Capleton did not hesitate and sprinted on stage and proceeded to ignite the venue with his inimitable bursts of fireworks.

From then on both artiste took turns at entertaining the audience with their contrasting styles. Cocoa Tea proved the perfect foil for Capleton as he managed to restore sanity with his sweet vocals after the Fireman blazed a musical trail.

However, after about 20 minutes both artistes left the stage signalling the end of the concert.

Earlier, veteran Leroy Sibbles started the ball rolling with is catalogue of Heptones rock steady hits. After his ode to Fat Girls and Party Time, he took up the bass guitar and reminded those present that many of the staple rhythms, which are still be used in today’s version of Jamaican music, were his creations.

Sibbles set came across well even though many of the younger persons inside the amphitheatre seemed ignorant of his rich contribution to Jamaica’s popular music.

Sibbles was followed by a sedate Nadine Sutherland who tried hard to get the crowd involved in her set. To be fair to Sutherland, she remained professional throughout but failed to get the majority of persons moving and singing along.

Three-time festival song winner Tinga Stewart was in fine fettle and raised the tempo a notch with his rendition of Percy Sledge’s Cover Me. He also scored well when he belted out the popular No Way No Better Than Yard. Stewart is a consummate showman and by the time he was finished the audience was well pleased and showed their pleasure by shouting for the artiste to return after his time on stage had ended.

He duly obliged and was well accepted.

Youthful singer Da’ville is blessed with a superb voice and had several females eating out of his palm as he sang Can’t Get Over You, This Time I Promise, In Heaven and the popular Always On My Mind. However, the artiste seemed to get carried away and spent too much time talking which seemed to irritate some members of the audience. Da’ville is filled with potential but could do well with taking a leaf out of some of his older counterparts who are versed in the art of pleasing an audience for the entire length of their performance.

It did not help when the master of ceremonies, called for the artiste to return to the stage twice even though time was running out.

To compound matters the organisers chose to present a fashion show and a shortened soca set by Trinidadian Fay-Ann which ate into the time allotted for the show closers.

All in all the One Love Reggae Festival is a good concept but the organisers would do well to pay more attention to stage management and remember that it is the audience that is the major component of live events and should be the ones who are ultimately catered to.

Unite Within or Fight Without Warns Labour Leader