The St. Kitts-Nevis Olympic Committee (SKNOC) said Collins was given permission to see his wife for one night but that they had not heard from him for three days.

He was a man on edge, angry that his wife was not included as a part of the St.Kitts-Nevis official Olympic delegation to London.

Although the olympic village was great, he said, he needed to get away for “some peace and quiet” to focus on his “last chance” to win a medal, as challenging as it might have been. Only his wife could provide him with the focus that he needed, he insinuated.

“Are you asking me to abandon my wife for the team,” Collins retorted, when questioned by the SKNOC about his whereabouts and commitments as part of Team SKN at the London 2012 Games.

“I feel that I should stay in a hotel with my wife, with or without their permission,” he told the BBC. “I expected her to be part of the team as coach because she’s not only my wife but assistant coach; she assists me in coaching two other guys in the team, Jason Rogers and Lestrod Roland.”

Collins later took to Twitter saying, “I put God above everything and my wife above everyone, if not, what kind of man would I be?” and “I’m a married man. This means that I signed the ultimate contract to forsake all others for my wife, plain and simple”. 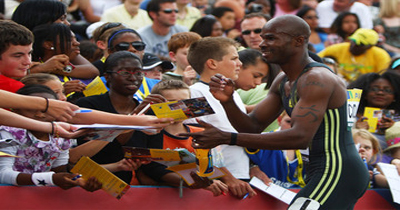 SKNOC officials said that they had no issue with Collins visiting his wife as he was granted permission to do so, but took issue with his non-compliance to rules and instructions and his lack of team cooperation.

With respect to his wife included as a part of the coaching team, the SKNOC said “his wife as part of the team was never any issue or discussion” with them.

“I do not know of her coaching qualifications,” an official of the SKNOC said.

“The St. Kitts-Nevis Amateur Athletics Association (SKNAAA) recommends a team to the SKNOC, including the coaching staff, and of course it’s based on the performance of athletes, on the pool of coaches, their qualifications and so on, and those who fall in the national coaching group,” the SKNOC said.

“We have a whole cadre of coaches. We have a qualification structure and we select them (coaches) based on their experience, their knowledge of coaching, everything. Every two years we do coaching sessions and persons move up from youth, junior, to senior team. So we do not pick our coaches based on how many athletes we have on the national team, so make that very, very clear,” the officials said.

“Mrs. Collins will never, never, factor in as being part of our national coach,” they said.

The SKNOC said that the management team went out of their way to get daily passes for his wife to come to the olympic village and that they also sought approval for her to be at the warm up sessions.

“What else should we do,” the SKNOC officials said.