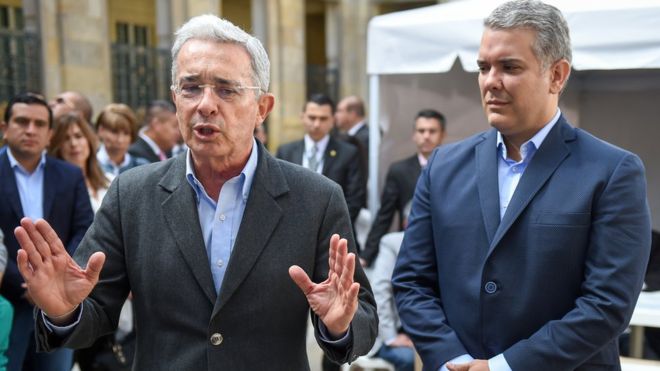 Colombia’s conservative parties, opposed to the 2016 peace deal with Farc rebels, have taken the lead in the country’s elections.

Sunday’s vote was the first in which the former Farc guerrillas, now a political party, took part.

With more than 90% of votes counted, ex-president Álvaro Uribe’s Democratic Centre party won the most seats.

The Farc performed poorly, in line with expectations – but is guaranteed some seats by the peace agreement.

It received just 0.4% of the total number of votes – but will receive five seats each of the two chambers of parliament.

Polling was also reported to be unusually peaceful compared to previous years, when it has sometimes been marred by violence.

The right-wing parties performed best, but still fell short of an overall majority.

The Farc was never expected to win lots of seats – they had plenty of critics who felt it was too soon for the former guerrilla fighters to be running for Congress.

But these results just underline that no matter how much influence they used to exert over the country during the conflict, now they’ve laid down their weapons, their power has all but disappeared.

The congressional vote was seen as a test for President Juan Manuel Santos – his government had been criticised for what many feel was a peace deal that was too lenient towards the Farc.

These elections have strengthened the hand of the right-wing parties ahead of the presidential vote in May so the future role of these political newcomers is uncertain.

The Democratic Centre emerged as the largest party, with 19 seats in the country’s Senate, and another 33 in the lower house of representatives.

But the results were fragmented, with no party achieving more than 16% of the total poll.

The three largest right-wing or conservative parties together have won 50 of the Senate’s 102 seats.

But the strong performance of Mr Uribe’s party – which vehemently opposed the terms of the peace deal – is indicative of the divided attitudes in the country.

Farc rebels were in open conflict with Colombia’s government for more than 50 years, engaged in a guerrilla war that killed more than 220,000 people.

Many Colombians felt that the former rebels should have been held accountable for crimes, rather than given political influence.

Also on Sunday, Colombians selected candidates in the presidential primary elections, choosing those who will vie to replace the architect of the peace process, President Juan Manuel Santos.

Iván Duque was selected for the right-wing coalition, while Gustavo Petro won the nomination for the left.

The pair will contest a first round of elections in late May alongside several other candidates, with the victor chosen in June. President Santos’s term expires in August.

Mr Santos was awarded the Nobel Peace Prize in 2016 for his efforts on the peace agreement.

Commonwealth Day Message by Her Majesty The Queen