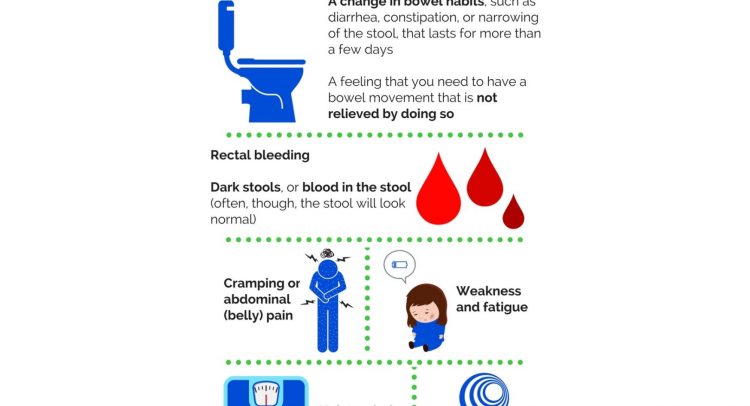 “All I experienced was generalized fatigue, but being a sleep-deprived father of a new baby, I thought that was normal,” shares a male patient diagnosed with Colon Cancer at 31 years of age. On trying to donate blood for his wife, who recently delivered their beautiful baby girl, a red flag came up. His haematological analysis revealed lower than normal iron levels and his blood count fell in the Anaemic range. Luckily, his physician insisted upon screening for Colorectal Cancers and a colonoscopy was one such test.

Following this test, the young father was diagnosed with Stage 4 Colon Cancer. “It was a devastating blow to us,” said this young, male patient. “I had a family history, so I knew it was possible and was expecting it in my fifties, but I thought I had time. I am 31.”

Another such case, a 35-year-old mother of two complained to her health care physician of feeling nauseated all the time. She was diagnosed with irritable bowel syndrome and given medication for depression.

Still, the nausea persisted. Another diagnosis of a stomach virus followed with treatment, but her nausea continued. A colonoscopy to test for colorectal cancer revealed what really ailed her. She had stage 3 colon cancer. This patient had no such family history and was not expecting such a diagnosis ever in her lifetime.

Recently, the world said goodbye to actor, Chadwick Boseman who played King T’Challa in Black Panther and baseball legend Jackie Robinson in 42. He was diagnosed in 2016 at the age of 39 years.

His private struggle and tragic death from Colon cancer at the age of 43 has been especially jarring to the medical community, as it highlights an alarming trend.

Colorectal cancer, which causes tumours in the colon and rectum, most commonly affects people who are 50 and older. But experts have been troubled by the growing body of research showing a steady rise in the number of young people diagnosed. While colorectal cancer screening with colonoscopies beginning at the age of 50 has undoubtedly saved lives, colorectal cancer remains a prevalent and challenging disease. In the next 15 years, more than one in 10 colon cancers and a quarter of all rectal cancer cases will be diagnosed in patients younger than the traditional screening age of 50, reported by researchers at Harvard Health.

Dr David Ramsay, a US based gastroenterologist said he’s seen several patients in their 30s with colorectal cancer over the past two years. “In the past, if a younger patient had rectal bleeding, a doctor might have dismissed it as a case of hemorrhoids,” Ramsay said. “Now, if there’s any red flag like that, a patient needs to see a gastroenterologist.

Colorectal Cancer is the third most common cancer in Trinidad & Tobago; (12%) in men and women (11%). For the US, it is the second leading cause of cancer deaths, according to the Centers for Disease Control and Prevention. In 2014, an estimated 136,830 new cases were diagnosed with 50,310 deaths attributed to the disease.

It’s also preventable, treatable and beatable if it’s caught early through screenings for and removal of polyps before they become cancerous. The American Cancer Society says that half of all colon cancer deaths a year could be prevented if everyone older than 50 got screened.

This lack of awareness and early screening is a problem, experts say — one that is believed to be a major reason colorectal cancer is usually not caught in young people until the disease has advanced into later stages where survival rates are much lower. Actor Chadwick Boseman was diagnosed in 2016 with Stage 3 colon cancer, which progressed to Stage 4 before his passing on August 28. “It’s an absolute tragedy,” said William Cance, the American Cancer Society’s chief medical and scientific officer. “To think that he is gone at 43 from a preventable death is so sad. He was in great shape, with no lifestyle related risk factors so clearly there’s something else, and what that is, is an active area of research.”

Here’s how experts say we — both patients and doctors — can work to prevent deaths from colon cancer.

Know the Symptoms, Normalize the Conversations

Not many patients feel completely comfortable talking about the symptoms associated with colorectal cancer, even during doctors’ visits, said Cance, a surgical oncologist.

“You’re talking about changing bowel habits,” he said. “I have blood in my stool. I’m constipated today and then I have diarrhoea tomorrow.’ It’s so personal.”

That reticence to discuss symptoms may play a role in delayed diagnosis as there is significant embarrassment associated and stigmas that come with it.

Cancer urges health care providers to incorporate questions about bowel symptoms into their routine conversations with patients, so people don’t have to wrestle with bringing up the subject themselves, treating bowel symptoms as common like a flu, a cough or a rash maybe. In normalizing discussing bowel symptoms, red flags won’t be missed.

When to see a doctor

Many people with colon cancer experience no symptoms in the early stages of the disease. When symptoms appear, they’ll likely vary, depending on the cancer’s size and location in your large intestine.

See a doctor if you notice any persistent symptoms that worry you, such as the following:

• A persistent change in your bowel habits, including diarrhoea or constipation or a change in the consistency of your stool

• Rectal bleeding or blood in your stool

• Persistent abdominal discomfort, such as cramps, gas or pain

• A feeling that your bowel doesn’t empty completely

The importance of Screening

From the time the first abnormal cells start to grow into polyps, it usually takes about 10 to 15 years for them to develop into colorectal cancer. With regular screening, most polyps can be found and removed before they have the chance to turn into cancer. Screening can also detect a colorectal cancer early, when it’s small and easier to treat.

When colorectal cancer is caught in Stage 1, Cance shares, survival chances are in the “mid-90s.” By the time it progresses to Stage 3, the rate is between 60 and 80 percent. At Stage 4, survival chances drop to between 10 and 20 percent. Cance said he hopes Boseman’s death will galvanize more people to get screened.

“In the end, for screening, we always say the best test is the one that gets done,” Cance concludes.