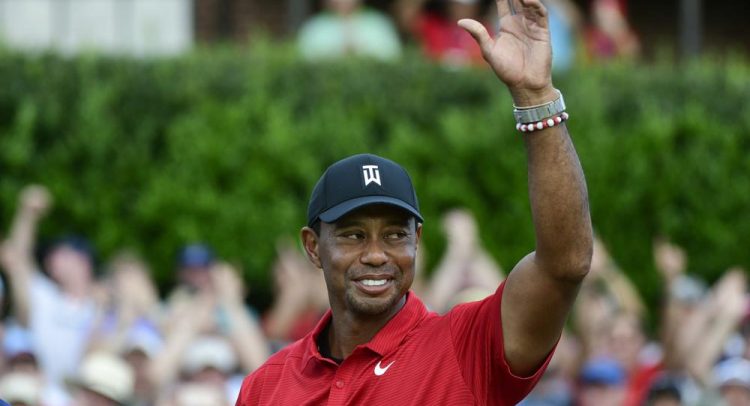 PONTE VEDRA BEACH, Fla. (AP) — Tiger Woods is going into the World Golf Hall of Fame with three others who no doubt will be overshadowed in the presence of a player who transcended the sport like no other.

It was like that every time Woods teed it up, from his “Hello, world” debut in Milwaukee in 1996 through his 15 majors and 82 titles on the PGA Tour. Win or not, Woods was playing and it seemed everyone else was along for the ride.

Ernie Els might have summed it up as well as anyone in early 2000. They matched eagles on the 72nd hole at Kapalua and birdies in the playoff. Woods beat him on the second extra hole with a 40-foot putt for his 18th win worldwide and fifth in a row on the PGA Tour.

Except for his age — 24 — Woods already had met current Hall of Fame requirements by then.

“He’s probably going to be bigger than Elvis when he gets into his 40s,” Els said that day.

Now he is 46, and Woods certainly will be the star attraction when he is inducted Wednesday night, even if it takes place in front of his smallest gallery — no more than 500 are expected for the ceremony at the PGA Tour’s new headquarters.

Making the night even more special is his 14-year-old daughter, Sam, will be introducing him.

Finchem led the tour to unprecedented growth. If he was behind the wheel, then Woods was the engine. In an interview after he was elected, Finchem laughed when asked how his 22 years as commissioner would have been if Woods had played tennis instead.

“It would have been a much more difficult job,” he said. “Tiger coming on the scene … took our sport to another level. It continues on today. As a sport, we were blessed he didn’t like tennis.”

All of them earned their place. All will be honored. The living members will have a night to remember, even if the attention is squarely on one person.

“With no disrespect to anyone else, he should almost go in on his own,” Rickie Fowler said. “It should be his induction. It takes away, potentially, from the other three. Not a knock on Tiger being in the same class, but he is so much bigger. There’s a lot of ways to look at it.”

Padraig Harrington found one of those ways.

He recalls the time he received an honorary doctorate from St Andrews University before the 2010 British Open, an emotional night with 1,000 in attendance in Younger Hall. Even with two claret jugs among his three majors, not many were there to see Harrington.

“It was a big deal to get an honorary doctorate, but it actually added to mine that they were there with me,” Harrington said. “Arnold did not take away from it. Johann Rupert added 100% to that occasion. The people getting in (the Hall of Fame), they’ll have a better day and a better story to tell.

“Maybe they won’t get the same media — or they could get more media because there will be more people covering it.”

Interest, no doubt, will be high for an induction that was bound to happen.

“I don’t know the criteria, but the man could have been in the Hall of Fame 15-plus years ago,” Ryder Cup captain Zach Johnson said. “It’s going to be a nice celebration for a guy who has taken the game to heights that most people didn’t know could happen.”

Based on the criteria when Woods turned pro in 1996 — the PGA Tour ballot required 10 victories and two majors (that included The Players Championship) — he would have met the performance standards at the 1999 PGA Championship after just three years on tour.

In his next 18 starts on tour after that, he had 10 wins and two majors. Woods compiled ridiculous numbers while going through four swing coaches and twice as many surgeries.

“Tiger changed people’s perception of golf from a game to a sport,” Harrington said.

The shame is that more people can’t attend the induction ceremony, a product of limited space at PGA Tour headquarters (and $1,000 a ticket for a Hall of Fame fundraiser). The future of the World Golf Village, about 25 miles away in St. Augustine, is in doubt with so little traffic.

Johnny Miller and Nick Faldo shared the stage when the World Golf Village first hosted the induction ceremony in 1998.

Over the years, no one else captured Tiger’s share of attention. Bernhard Langer and Ben Crenshaw went in together in 2002, Nick Price and Annika Sorenstam a year later, Curtis Strange and Se Ri Pak in 2007. Even the year Phil Mickelson was inducted, no one entertained that night like the late Peter Alliss.

And when one player clearly stood out over the other inductees — Karrie Webb in 2005, Els in 2011 — that gap wasn’t as large as it will be with Woods.

He’s had the stage to himself for as long as he has played. The Hall of Fame is no different.