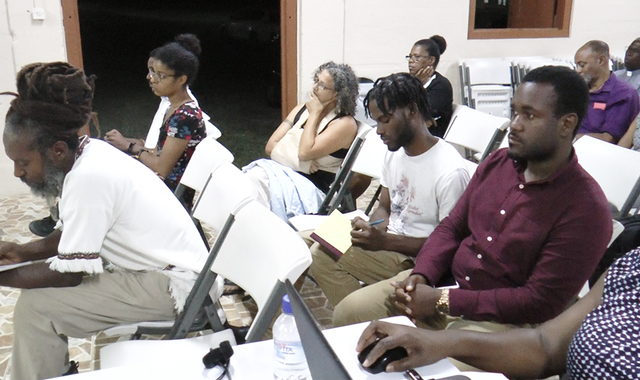 Community gets chance to air views on marijuana

Basseterre, St. Kitts, 7th April, 2018 (MyVueNews.com) – Residents of the St. Peter’s Community turned out for the first in a series of town hall meetings hosted by the St. Kitts and Nevis National Marijuana Commission.

Among those present were members of the Rastafarian community who have long been calling for the legalisation of marijuana.

The meeting commenced with a presentation of facts and latest evidence regarding the medical, social and economic implications of marijuana use by the chairperson of the National Marijuana Commission and Chief Medical Officer, Dr. Hazel Laws.

The commission was set up by the Team Unity Government in response to calls for a national debate on the legalisation or decriminalisation of marijuana.

Dr. Laws commented, “Many countries, internationally and regionally, have proceeded to decriminalise possession of small amounts for medical, religious and recreational use. Based on the foregoing, an increasing number of citizens here in the Federation of St. Kitts and Nevis have joined the lobby, asking for amendments to the local law.”

According to information from the Commission, the consultative meetings fall under phase two of the commission’s mandate. Phase one of the commission’s work, which is now completed, involved conducting a situational analysis and exploring the latest evidence regarding the legal, medical, social, economic and religious implications of marijuana and its derivatives, taking into consideration its benefits and detriments.

The commission, in collaboration with the Department of Statistics within the Ministry of Sustainable Development, will conduct, also, a survey to determine the prevalence of the use of marijuana on St. Kitts and Nevis.