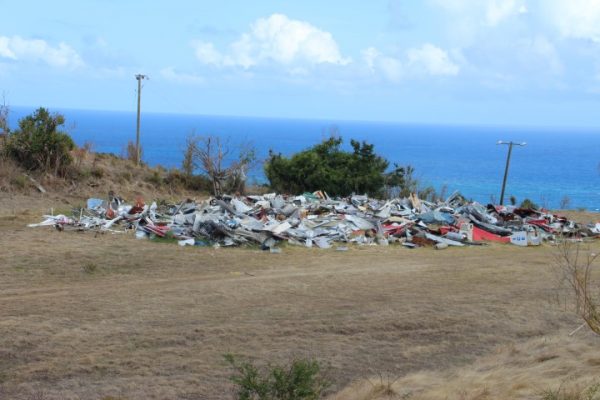 Concerns over metallic dump on VG as hurricane season looms 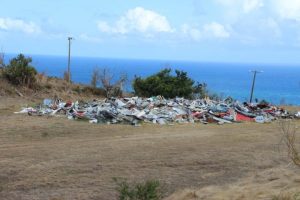 Residents of Virgin Gorda have raised concerns over a metallic dump site that was created in the North Sound section of the island months ago.

The dump in question is located near the Robinson O’Neal Memorial Primary School.

The unsecured contents at the unofficial dump range from sheets galvanized metal, to poles and other household items. Virgin Gorda residents now believe the items have been at the location for too long and they fear the unsecured contents could be used as missiles during a storm or hurricane.

The dump was only temporary

When contacted to speak on the issue, Sister Islands Programme Coordinator Vincent Wheatley said the North Sound dump was only to be used temporarily.

“After Hurricane Irma, we were forced to create temporary dumps, and one of the items we chose to put in the dump was metallic stuff,” he told BVI News at the weekend.

Wheatley said the Gorda Peak dump is the designated area for metallic waste on the sister island. He said those types of waste are secured beneath rocks to prevent them from becoming projectiles whenever there are strong gusts.

However, he said the unofficial dump at North Sound was created because of issues getting metallic debris to the rightful Gorda Peak location.

“We had two issues on Virgin Gorda — whenever it rained, we couldn’t get to the [official] dump on Gorda Peak. The dump isn’t properly paved all the way so anytime it gets wet, the ground gets very soft. So, there were several days we couldn’t get to the dump, so we had to find temporary dump sites and that (North Sound) became one of the dump sites, especially for metal,” Wheatley explained.

He said the other issue had to do with money. Wheatley said authorities have not yet made funds available for the items to be sent abroad for recycling.

“The idea would be that a crusher would take the metal afterwards and ship it overseas to a recycler but it never happened,” he said.

And while acknowledging that the North Sound dump and its contents are a “danger”, Wheatley assured: “We are going to put it in the Gorda Peak dump, and when there is money to move it in the proper way, they can go to the dump to get it.”

“If the storms come again, they (unsecured debris) won’t be all over the place. They will be away from residents.”

Volunteers to tackle task this weekend

He said residents are aiming to move the waste dumped at North Sound by Saturday.

He said the North Sound community is collaborating with Virgin Gorda Recovery Operations Centre (VGROC) and the Department of Waste Management to clear the site.

VGROC is a community group that started after the hurricanes to bring ‘hope’ to residents. The group was responsible for managing relief supplies and clean-up campaigns in the aftermath of the hurricanes.