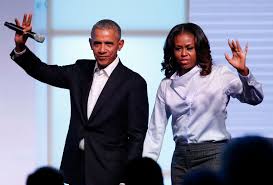 Conservatives Are Upset About The Obamas’ Netflix Deal Former President Barack Obama and first lady Michelle Obama have signed a deal with Netflix to produce original TV shows and movies, but many conservatives are raging mad about it.

Sources close to the negotiations told CNN that the payout was a “high 8-figure deal.”

While Barack has reportedly told associates “that he does not intend to use the new platform to wage a public campaign against his successor in the Oval Office, or to fight against conservative media outlets like Fox News,”…. the conservative backlash has already started.

Several of the more fragile types have lashed out on social media, voicing their displeasure with the deal and threatening to cancel their Netflix subscription.

Adding fuel to their mission is the fact that Netflix CEO Reed Hastings has also been critical of Donald Trump in the past. During the 2016 presidential campaign, Hastings endorsed Hillary Clinton and said “Trump would destroy much of what is great about America.”

“Hillary Clinton is the strong leader we need, and it’s important that Trump lose by a landslide to reject what he stands for,” Hastings said at the time.

Below are some Twitter reactions to the Obamas Netflix deal: