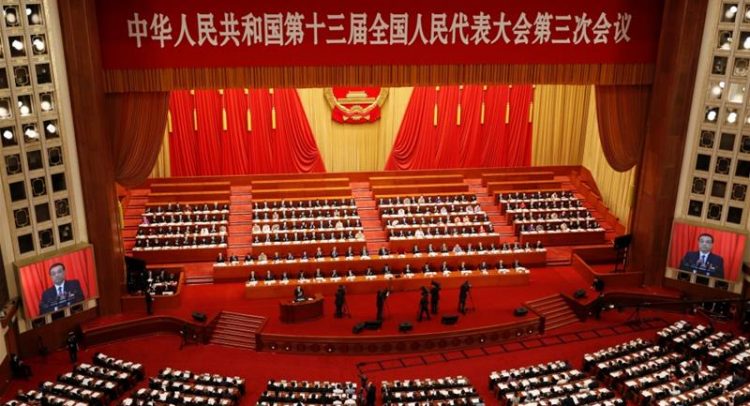 After a historic contraction in its economy due to the coronavirus, China’s government has made the equally momentous move to ditch its target for economic growth this year and instead has promised to boost spending on job creation.

“I would like to point out that we have not set a specific target for economic growth this year,” the report said. “This is because our country will face some factors that are difficult to predict in its development due to the great uncertainty regarding the COVID-19 pandemic and the world economic and trade environment.”

It is the first time that China has not set a target for gross domestic product (GDP) since the government began publishing such goals in 1990.

“Despite embracing relatively forceful stimulus, the leadership appear to be under no illusions that getting the economy back on track will be a challenging and drawn out process,” Julian Evans-Pritchard, senior China economist at research firm Capital Economics said in a note sent to Al Jazeera.

“Rather than set an unachievable annual GDP growth target, they simply didn’t publish one for the first time in decades,” he added.

The world’s second-biggest economy contracted by 6.8 percent in the first quarter from a year earlier, shrinking for the first time in decades, as the outbreak of the new coronavirus – which started in the central Chinese city of Wuhan – paralysed production and hit spending.

In the run-up to the NPC, the week-long meeting of the largely rubber-stamp parliament, China’s top leaders had promised to step up stimulus measures to bolster the economy amid rising worries that job losses could threaten social stability.

The government is due to set a target for urban job creation of more than nine million jobs, lower than the previous year’s target of approximately 11 million and a target for the urban surveyed unemployment rate of about 6 percent, higher than 2019’s goal, according to the document.

Li’s report did not offer “anything too out of the ordinary,” said Nie Wen, economist at Shanghai-based Hwabao Trust, “reinforcing views that China would not resort to mass stimulus that some market players have been betting on.”

Nie expects GDP growth to slow sharply this year to around 2 percent or 3 percent from last year’s 6.1 percent.

Louis Kuijs of Oxford Economics in Hong Kong said Beijing worries about excessive debt and financial instability but that Li’s “sizeable overall fiscal-deficit target indicates significant policy support for the domestic recovery that we expect to continue despite the challenging external background.”

Many of China’s main export markets including the United States, Europe and Asia are only slowly emerging from months of stalled economic activity to curb the spread of the virus.

Local government bonds could be mainly used to fund infrastructure projects, while special treasury bonds could be used to support firms and regions hit by the coronavirus outbreak, for subsidies to spur consumption or for boosting the capital structure of small banks, analysts say.

Fiscal policy will be more proactive and monetary policy more flexible, Li said in his report, adding that growth in M2 – a broad gauge of money supply – and total social financing will be significantly higher this year.

Since early February, the central bank has unveiled a series of measures from making cheap loans and providing payment relief to firms that have been hardest hit by the virus outbreak, to cutting lending rates and banks’ reserve requirements.

China also said it will boost defence spending by 6.6 percent compared with last year. The figure, set at 1.27 trillion yuan ($178bn), is closely watched as a barometer of how aggressively the country will beef up its military capabilities.

Photo: Chinese Premier Li Keqiang’s speech at the opening session of the National People”s Congress (NPC) at the Great Hall of the People in Beijing shifted China’s economic priority from growth to employment [Carlos Garcia Rawlins/Reuters]