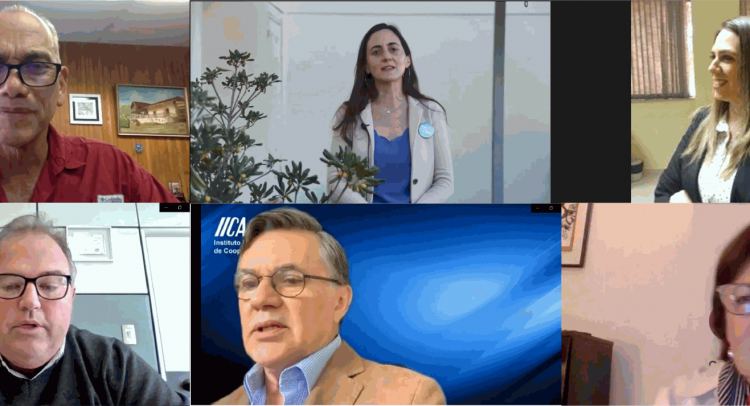 San Jose, 14 May 2021 (IICA) – Agricultural cooperatives seamlessly combine economic, commercial, social and environmental functions that are key to building increasingly sustainable food systems and responding to the current consumer demand for more and better food, together with good production practices.

This was one of the main conclusions arising out a series of virtual dialogues spearheaded by the Inter-American Institute for Cooperation on Agriculture (IICA), to ensure that the agriculture sector of the Americas comes to the UN Food Systems Summit 2021 with a strong voice and a unified position.

The first discussion forum, entitled “Cooperative Enterprises and their Contribution to Food Systems”, was jointly organized by IICA and Cooperatives of the Americas, with more than 100 people in attendance. There were interventions by ministers and secretaries of state, cooperative members, technicians, researchers and regional agrifood chain representatives.

Another objective of the meeting was to expand knowledge about the contribution of cooperative enterprises to food systems in the Americas.

Manuel Otero, Director General of IICA, and Graciela Fernández, President of Cooperatives of the Americas, represented the organizing institutions. The session was the first in a series of events promoted by IICA, as part of the preparatory phase for the Global Food Systems Summit; they will continue until June.

Graciela Fernández stated that, “We are clearly committed to sustainability, as seen from three dimensions: care for the environment; more democratic and ethical production and consumption of goods and services, whether public or private; and the prevention, in so doing, of continuously negative consequences for future generations”.

She also remarked that the region should promote “cooperative enterprises with practical tools that translate into specific projects to share experiences and to transfer knowledge and an international cooperation perspective”, even as she expressed support for IICA to represent the voice of cooperatives with a view to the upcoming Global Summit.

Minister Alvarado stressed that “We cannot speak about healthy food, without speaking about healthy agricultural practices that allow us to have safe food”, while remarking that sustainability does not only include environmental aspects, but also extends to “our farmers, who must be sustainable in all areas of their social, economic and environmental development”.

Thus, the Costa Rican minister maintained that, “Our small farmers are the cornerstone of societal development, guaranteeing food for our populations. Here I would also like to comment on the importance of cooperatives. Producers’ efforts to remain in the countryside and to continue producing must be supported by the cooperatives. Associative enterprises are indispensable to enabling our producers to remain in rural areas”.

On the other hand, Minister Undurraga applauded IICA on the choice of topic for the first meeting and maintained that “It is one of the key lines of action that this administration has prioritized, because we want small farmers to enjoy the same opportunities as large-scale farmers and to also put international markets within the reach of peasant family farmers. Therefore, we have focused efforts on strengthening associative enterprises in the agriculture sector”.

To this end, she indicated that “These types of meetings are so important, because they demonstrate the contribution that cooperatives are making to food systems, as well as to the territories and communities in which they are operating”. She also emphasized her country’s efforts to develop agricultural associative enterprises.

Undurraga observed that, “Agriculture is the cornerstone of rural development, which itself is essential for the future sustainability of our countries, adjusting to the new and changing reality. There are just some of the responses that we must work on in a coordinated manner, particularly with respect to cooperatives”.

The Paraguayan vice-minister outlined some aspects of the intense agricultural cooperative activity in her country, revealing that it is one of the main sectors of national production, which works closely with the public sector.

“We want to highlight the support that IICA always provides, to the benefit of production and sustainable development”, said Durruty.

Schwanke, on the other hand, focused on the importance of cooperatives in enhancing “the market power of small producers”, while emphasizing the need to “provide them with technical assistance, as they were established during times of adversity to improve the economic and working conditions of their members”.

Like Alvarado, the Brazilian secretary also referred to the key role that credit plays in developing cooperatives and said that “The Federal Government of Brazil has worked to increase the participation of credit cooperatives in all spheres, particularly in the rural sector”.

IICA’s Director General, Manuel Otero, remarked that the production of healthy and nutritious food depends on the existence of rural communities, facilitating job creation, rural inclusion and the participation of youth and women.

“We must appreciate that food production is impossible without the production of raw materials, because up to now, and I think for a long time to come, the dynamism of rural areas will play a key role – producing more than 90% of basic products and food”, he said.

Otero reiterated his commitment to defend and support cooperative enterprises and family farming, highlighting IICA’s efforts to ensure that the perspective of the agriculture sector of the Americas is heard at the Food Summit. To this end, the specialized international organization has prepared a document with 15 key recommendations, in addition to 11 other basic documents to supplement the work of its 34 Member States at the global forum.

The dialogue was coordinated by Álvaro Ramos, the former Minister of Agriculture of Uruguay and a member of IICA’s Advisory Council for Food Security in the Americas. Also participating were the former Minister of Agriculture of Brazil, Roberto Rodrigues, who is also a leading figure in the cooperative world, and Mario León, Manager of IICA’s Territorial Development and Family Farming program, who presented the work that served as the basis for the forum debates.

The conclusions of the five working groups that deliberated during the forum were summarized by Federico Villarreal, IICA’s Director of Technical Cooperation, and Danilo Salerno, Director of Cooperatives of the Americas, the regional unit of the International Co-operative Alliance.

The IICA Director of Technical Cooperation commented that “Cooperatives of all kinds can be found in all areas of food systems and are food systems in and of themselves”.

Villareal also emphasized that IICA wants to put on the table three key messages for discussion during the pre-Summit dialogues: the fact that farmers must be part of the proposed transformation of food systems; decisions must be science-based, to ensure the transparency of the transformation proposals; and agriculture is part of the solution to many global problems.

Salerno indicated that cooperatives are capable of producing food of sufficient quantity and variety to satisfy the global demand and mitigate the impact on global warming that takes place from production to consumption. He also emphasized their social component.

“Cooperatives are systems for the common good”, he said, “systems that not only produce goods and services, but also contribute in no small way to benefit the common good. We are agribusinesses made up of people, not just capital, and are based on values that create economic and social wealth, safeguard the land and are committed to the community”.

The experts underscored the need to revalue cooperative production in the eyes of consumers, investors and governments and to promote the dissemination of cooperative principles.

The session also underscored the importance of creating conditions to ensure generational succession of members and leaders of cooperatives to prevent rural flight.

It was suggested that, in order for cooperatives to compete with larger businesses, there should be increased cooperation and inter-communication among national and regional cooperatives, including knowledge and technology transfer.