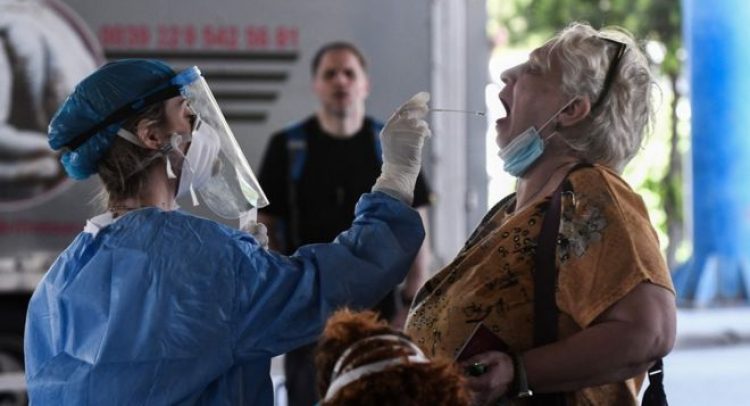 EU ambassadors meet on Wednesday to plan reopening external borders on 1 July, and travellers from the US could be among those not allowed in.

A number of European countries are keen to open up to tourists but others are wary of the continued spread of coronavirus.

The 27-member bloc must first agree the measures that non-EU countries should meet before deciding on a safe list.

The virus is spreading in the US, so it is likely Americans would be barred.

Brazil, Russia and other countries with high infection rates would also be left off a safe list, according to reports from Brussels.

The EU is not yet thought to have agreed how they will assess which countries meet health standards – one of the criteria for entry. Part of the problem is assessing reliable health data, reports say.

Russia and the US have a lower rate of cases per 100,000 inhabitants but are still higher than most of Europe. The US has seen 2.3 million infections and 120,000 deaths and cases are climbing in several states.

The European Commission is advising ambassadors only to consider countries that are comparable or better than the EU average when it comes to new infections, the trend in new infections, as well as testing and tracing.

Reports said member states were assessing two different lists. The Politico website said one covered countries with fewer than 16 cases per 100,000 people and the other with up to 20 cases, which would include Canada and Turkey. The New York Times said the list would be revised every two weeks, so the US could be added later.

Other criteria also being considered are reciprocity and links to the EU. France wants the EU to give access only when it is reciprocated by other countries, while Spain is said to be keen to reopen the border with neighbouring Morocco.

Earlier this month the European Commission also stressed that reopening borders with non-EU states in the Western Balkans was a priority from 1 July.

The US may also be a problem diplomatically, as on 14 March President Donald Trump unilaterally closed US borders to countries in the EU’s Schengen border-free zone. The EU condemned the move at the time.

Can Europe save its tourist season?
The EU is split into two groups that include those hoping to salvage something from this year’s summer tourist season and those that fear for the health situation.

Although the EU urged the 27 member states to reopen internal borders from 15 June, several countries have moved carefully to avoid a second spike in infections.

Denmark, which was among the first European countries to start lifting its lockdown, has begun reopening its borders more slowly than others. Denmark is a Schengen state but it still has strict criteria for those visiting the country.

Tourists were allowed to return from mid-June from Norway, Iceland and Germany, but not from neighbouring Sweden.

Greece, meanwhile, opened its borders to a number of countries on 15 June in a bid to kick-start its tourist season.

Japanese, Israeli, Australian and New Zealand travellers are allowed in while higher-risk countries such as the UK and Belgium face compulsory testing and quarantine.