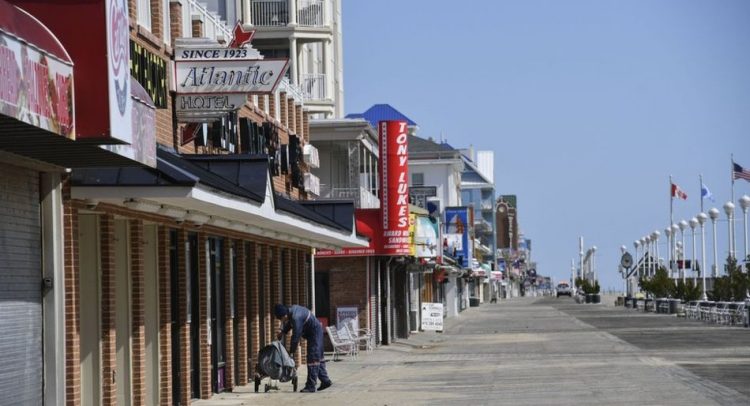 (BBC) – The number of Americans seeking unemployment benefits has surged for a third week as the economic toll tied to the coronavirus pandemic intensifies.

To shore up the economy, the Federal Reserve said it would unleash an additional $2.3tn in lending.

The deepening economic crisis comes as the number of virus cases in the US soars to more than 430,000.

Over the last three weeks, more than 16 million people have made unemployment claims, as restrictions on activity to slow the spread of the virus force most businesses to close and put about 95% of Americans on some form of lockdown.

The surging joblessness is a stark reversal for the world’s biggest economy where the unemployment rate had been hovering around 3.5%.Economists now expect that rate has hit the double digits.

“Today’s report continues to reflect the personal sacrifice being made by America’s workers and their families to slow the spread of the coronavirus,” Labor Secretary Eugene Scalia said.

The Federal Reserve on Thursday announced programmes it said would provide more than $2.3tn in loans, including loans for states and municipalities, whose budgets have been strained by the crisis.

The US Congress has also passed a roughly $2tn rescue bill, which funds direct payment for households, assistance for businesses and increased unemployment benefits. Lawmakers are now discussing further relief.

“Our country’s highest priority must be to address this public health crisis, providing care for the ill and limiting the further spread of the virus,” the central bank’s chairman Jerome Powell said. “Our actions today will help ensure that the eventual recovery is as vigorous as possible.”

But the number of people and firms seeking assistance has overwhelmed rescue efforts so far.

In New York, Lou Benavides, who works in the music industry, has tried for weeks to register for jobless benefits, but cannot reach the Labor Department to finish processing his claim.

“There was one day when I made like 300 calls,” he said. “I still have not spoken to a human being.”

The 6.6 million jobless claims filed in the US in the week to 4 April is actually a slight dip from the 6.8 million registered the week before.

But economists warn that the figures are unlikely to ease anytime soon.

“The stimulus from the US government and the Federal Reserve will soften the shock to some degree. But with business restrictions and closures still in place, the coming weeks will likely reveal more people facing income and job losses,” said Robard Williams, senior vice president at Moody’s Investors Service.

More than 80% of the global workforce has been affected by full or partial business closure due to the pandemic, according to the International Labour Organization, which is part of the United Nations.

The charity Oxfam has warned the economic fallout from coronavirus could increase global poverty by up to half a billion.

Canada on Thursday said employers cut a record 1 million jobs, while the unemployment rate jumped to 7.8%.