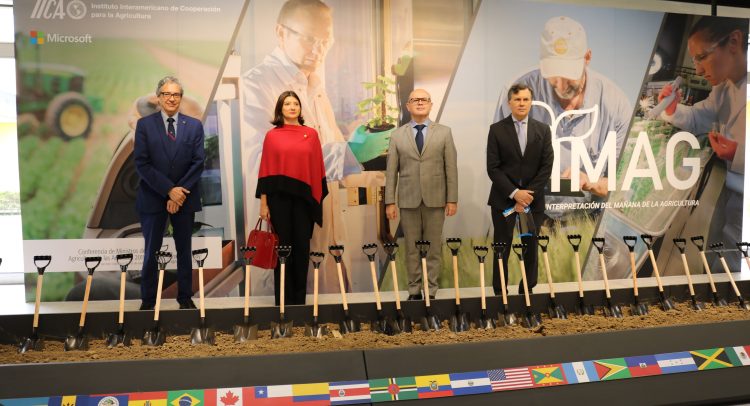 The Minister of Foreign Affairs and Worship of Costa Rica, Rodolfo Solano, met with the Director General of IICA, Manuel Otero, to explore joint initiatives and mechanisms for fostering cooperation.

The Deputy Foreign Minister for Bilateral Affairs and International Cooperation, Adriana Bolaños, and the Deputy Foreign Minister for Multilateral Affairs, Christian Guillermet, also participated in the meeting, which was held at the headquarters of the Inter-American Institute for Cooperation on Agriculture (IICA) in San Jose.

“A stakeholder like IICA is a strategic partner that would enable us to enhance our internal capacities for innovation and creativity with respect to food security, in order to guarantee health and function as a diplomacy that enables us to draw closer to other countries”, remarked Foreign Minister Solano.

The head of Costa Rican diplomacy also praised IICA for making its broad, renowned network of experts available to the governments as well as for implementing projects within the framework of increasingly numerous public-private partnerships.

Solano also highlighted the strategic nature of the multilateral platform that the Institute makes available to a country like Costa Rica.

“IICA is a strategic partner with which we hope to work, no matter what. The Institute can assist us in fostering technology transfer and good practices within the agriculture sector, as well as in strengthening partnerships and knowledge networks that drive national development”, stated the foreign minister.

Manuel Otero, in turn, noted that “cooperation affords an opportunity for the future, and we are working hard to transform agriculture so that it becomes more efficient, sustainable and equitable, a process in which youth and rural women will play a leading role”.

The Costa Rican officials toured the Interpretive Center for Tomorrow’s Agriculture (CIMAG), the Typical Rural House and the Fab Lab digital fabrication lab, all of which are located at IICA Headquarters and were developed within the framework of public-private partnerships with Microsoft, Bayer, the Costa Rican Ministry of Science, Technology and Telecommunications, among other partners.

“The time has come for public-private partners to engage in more long-term rather occasional work. As a result of the shortage of resources at the global level, sectors have become increasingly aware of the fact that joint work can yield more and better results”, stated Deputy Foreign Minister Bolaños.