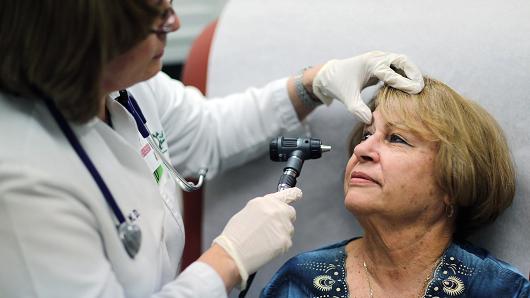 U.S. spending on health care is nearly twice the rate of 10 other high-income countries, according to a study in the Journal of the American Medical Association.

Americans used health care at similar rates as their peers, the researchers said in the study published Tuesday. Labor, administrative and drug costs helped drive the differences in spending.

Health-care spending ballooned to nearly 18 percent of the U.S. gross domestic product in 2016. That figure ranges from about 10 percent to 12 percent in the 10 other nations — the United Kingdom, Canada, Germany, Australia, Japan, Sweden, France, the Netherlands, Switzerland and Denmark, according to the paper.

The U.S. had the highest pharmaceutical spending per capita among its peers at $1,443, the researchers found, compared with an average of $749 for all 11 countries. Generics represented 84 percent of the U.S. market, the highest amount among peers.

“Despite having the highest rate of generic penetration, the amount that the United States spent on generic products as a percentage of total pharmaceutical spending was similar to other countries, suggesting that brand-name pharmaceuticals were largely responsible for high overall spending,” the researchers wrote.

The Harvard-based researchers were led by Irene Papanicolas, a visiting professor at Harvard from the London School of Economics and Politics.

How drugs are paid for varies among the countries studied. A recent White House report recommended finding a way to get foreign nations to “price drugs at levels that appropriately reward innovation, rather than disproportionately putting that that burden on American patients and taxpayers.”

Labor costs also contributed to the spending disparity. Salaries for generalists, specialists and nurses were all higher in the U.S. than in the other countries.

And while the U.S. spent the most on health care, it performed the worst on some measures. Life expectancy of 78.8 years was lower than the average of 81.7 years among the countries studied. Infant mortality was the highest, at 5.8 deaths per 1,000 live births in the U.S., compared with the average of 3.6 per 1,000.

The report comes as calls for a better system have grown. President Donald Trump has repeatedly accused drugmakers of “getting away with murder.” Technology giants have entered the space promising to do better. Even Amazon’s Jeff Bezos, J.P. Morgan’s Jamie Dimon and Berkshire Hathaway’s Warren Buffett have partnered to try to lower costs.

The researchers said data such as these “are needed to inform policy decisions” as patients, physicians, policymakers and legislators debate the future of the U.S. health system.