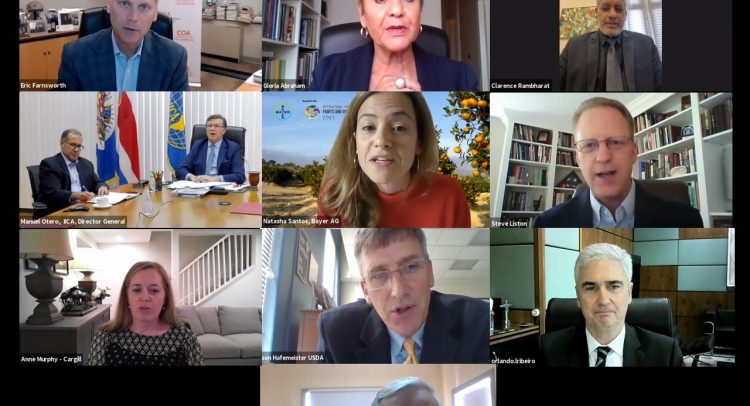 Council of the Americas and IICA: International trade is key to improving the circumstances of farmers and rural communities

San Jose, 18 June 2021 (IICA). The future of agrifood systems in the Western Hemisphere with an emphasis on the role of farmers and post-Covid-19 recovery was the topic of a high-level debate organized by the Council of the Americas and the Inter-American Institute for Cooperation on Agriculture (IICA).

The event included the participation of influential experts from the public and private sectors and was organized within the framework of the debate and consensus process in anticipation of the United Nations Food Systems Summit 2021 scheduled for September.

Dubbed the “Roundtable on Agriculture and Food Systems: How international trade can benefit rural communities and producers”, the event was a continuation of anther debate organized by the Council of the Americas and IICA to discuss how to improve the welfare, productivity, profitability, and sustainability of farmers.

Gloria Abraham, former Minister of Agriculture and current Ambassador of Costa Rica to the World Health Organization (WHO) and President of the Committee on Agriculture, presented the topic and opened the floor to a productive debate between the top government officials of three countries and representatives of the private sector and agriculture.

In addition to Ambassador Abraham, Clarence Rambharat, Minister of Agriculture, Land and Fisheries of Trinidad and Tobago; Orlando Leite Ribeiro, Secretary of Trade and International Relations of Brazil’s Ministry of Agriculture, Livestock and Food Supply; and Jason Hafemeister, acting Deputy Secretary of Trade and Agriculture with the United States Department of Agriculture (USDA), also presented at the event and exchanged data, information, and perspectives with Eduardo Schwerter Añazco, President of the Pan-American Dairy Federation (FEPALE); Natasha Santos, Vice President of Global Stakeholders Strategy and Affairs at Bayer AG; and Anne Murphy, Director of Business Relations at Cargill.

The roundtable was organized to discuss what modifications in international trade would be beneficial for farmers and rural communities; what public policies would strengthen global and regional agrifood systems; and how the public and private sectors could work together to ensure producers are better able to leverage international trade, among other topics.

IICA has been working in collaboration with its 34 Member States to define unifying messages ahead of the 2021 Food Systems Summit that would spotlight agriculture and producers and show the world the transformations in production methods that have been taking place in the hemisphere in benefit of sustainability.

The global event will focus on issues like the necessary transformations to eradicate hunger, a healthy diet, and environmental conservation.

IICA is a member of the Food Systems Champions Network—a group of individuals and organizations committed to its objectives—in representation of the agricultural and rural sectors of North and Latin America and the Caribbean.

Upon closing the event, Manuel Otero expressed that “the current situation requires us to strengthen public policies and to make decisions based on science to stimulate agricultural trade and avoid artificial obstacles in the exchanges that are essential for the economic recovery of the countries”.

Latin America and the Caribbean is the largest net exporter of food in the world, representing almost 14% of all international trade. For this reason, the agrifood sector will play a decisive role in the post-pandemic economic and social recovery of the countries in the region.

Since 1960, the world population has more than doubled and agriculture has responded with a sharp increase in food production. Today, projections indicate that the planet will reach 10 billion inhabitants by 2050 necessitating an increase in productivity in harmony with nature. Given this scenario, the continent will play a leading role as a large producer of agriculture and environmental services, thanks to the quality and diversity of its ecosystems.