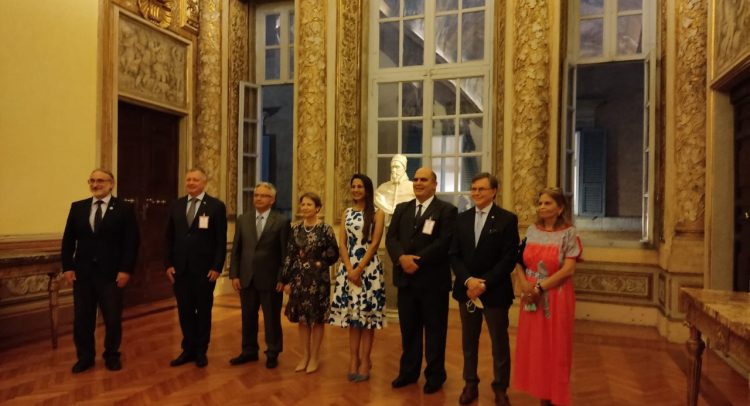 Countries of the Americas give resounding display of unity

Food Systems Pre-Summit: The countries of the Americas give a resounding display of unity at global forum on the future of food production

Rome, 28 July 2021 (IICA). The countries of the Americas gave a strong display of unity in the context of the global debate on the transformation of agri-food systems, demanding that their voice be heard and their agreements fully incorporated into the ongoing preliminary discussions.

The ministers of agriculture and other high-level officials of 33 countries in the Hemisphere met to emphasize the region’s role as guarantor of global food security and jointly presented to the world the document entitled “On the road to the United Nations Food Systems Summit: Key messages from the perspective of agriculture in the Americas”.

The important event was organized by the Inter-American Institute for Cooperation on Agriculture (IICA) and was held at the Brazilian Embassy in Rome, the host city of the United Nations Food Systems Pre-Summit, in preparation for the Summit that will take place in New York in September.

The meeting was held in a hybrid in-person/virtual format and was attended by Ministers of Agriculture Tereza Cristina Correa of Brazil; Luis Basterra of Argentina; Santiago Bertoni of Paraguay; María Emilia Undurraga of Chile; José Angel López of Guatemala; Mauricio Guevara of Honduras; Zulfikar Mustapha of Guyana; Tanlly Vera of Ecuador; Fernando Mattos of Uruguay; Augusto Valderrama of Panama; Clarence Rambharat of Trinidad and Tobago; Indar Weir of Barbados; and Floyd Green of Jamaica.

Secretaries, deputy secretaries and high-level officials of other countries in the hemisphere also joined the meeting and supported the presentation, in addition to the Director General of IICA, Manuel Otero.

The document contains 16 key messages on the irreplaceable role of agriculture; spotlights farmers as central to food production; and stresses that agriculture is fundamental to eradicating poverty, driving rural development and protecting the environment.

On behalf of his colleagues, the document was introduced by Minister Bertoni of Paraguay, Chair of IICA’s Executive Committee and current Chair of the Southern Agricultural Council (CAS)—the forum for consultation comprised of the ministers of Argentina, Bolivia, Brazil, Chile and Uruguay.

“This document represents the vision of a region that is the main producer of food for the world and that has reached a consensus and assumes its responsibility in terms of both agricultural production and sustainability”, stated Bertoni.

Minister Tereza Cristina remarked that agriculture is part of the history and culture of the Americas, a continent with deep-seated roots in rurality. “We are the world’s main producer of food and ecosystem services; as such, our region must be included in the narrative taking place at the Summit. It cannot be said that agriculture is responsible for climate change”, stated Brazil’s top agricultural official.

Representing Argentina, Minister Basterra stated that “the Americas will not be spectators of the decisions of others; the Hemisphere contributes to solving such serious problems as climate change and the need to produce more food for a growing population”.

We accept scientifically-based decisions, but not other kinds of decisions that endanger the interests of the region”, he argued, also emphasizing that the countries of the Americas know how to value their natural capital and the ecosystem services that they offer. He insisted that “The way in which we produce is not the problem. On the contrary, it helps to resolve it”.

Minister Mustapha of Guyana—speaking on behalf of his country and as the Chair of the task force on food security for the Caribbean Community (CARICOM)—gave an overview of the challenges faced by agricultural production in the region, mentioning factors such as trade costs, vulnerability to climate change, economic shocks, lack of infrastructure and barriers to access financial mechanisms. However, he assured the meeting that, “Despite these problems, we have a solid commitment to food system transformation”.

Uruguay’s minister, Mattos, appealed for the prioritization of science and the rejection of “theories that seek to link the Hemisphere’s agricultural production to climate change. We are the solution and not the problem in food systems.  We cannot propose to limit consumption of agricultural products while other sectors, such as the fossil fuel industry, are the primary culprits for greenhouse gas emissions”.

On the other hand, Ecuador’s minister, Vera, remarked that the consensus achieved by the region ahead of the Food Systems Summit was “historic” and emphasized that the Americas are aiming to tackle hunger and develop their economies through agriculture, without neglecting their ecosystems.

“We are not part of the problem, but are the solution”, echoed Undurraga, the minister from Chile, while underscoring the importance of the three dimensions of sustainability in agri-food system transformation: the economic, the social and the environmental.

Jason Hafemeister, the United States’ Deputy Under Secretary for Trade and Foreign Agricultural Affairs felt that the priority is “to produce more food with fewer resources” and stressed that the group of ministers of Agriculture and other officials participating in the region “embody the spirit of the Americas and will play a critical role with their contribution of new ideas”.

Minister López of Guatemala, the current Chair of the Central American Agricultural Council (CAC), remarked that the challenge is to “dignify food production, as its true dimension is undervalued. The pandemic has demonstrated its importance to us”.

The Honduran Secretary of Agriculture, Guevara, emphasized the support that IICA had given to his country during the pandemic and spoke of the challenge of “converting traditional subsistence farmers into high-value farmers”, emphasizing that “we have made a significant effort to provide assistance to all our farmers, who are facing many difficulties to access innovation, credit, technology and productivity, because most of them are subsistence farmers”.

Minister Valderrama of Panama focused on global inequalities and stated that, “It is the responsibility of the wealthier countries to demonstrate their solidarity with smaller and poorer countries. We are victims of climate change and of unjust international trade scenarios”.

Minister Rambharat pointed out that consumers throughout the world are increasingly demanding healthier foods. For her part, Lourdes Cruz, Director of International Affairs in Mexico’s Secretariat of Agriculture and Rural Development (SADER), said that the priority should be “to work for the well-being of the families in our rural areas” and insisted that the Americas “is the region that engaged in the most discussions to present a unified proposal at the Summit”.

The importance of the hemisphere’s unified position was also highlighted by Minister Green of Jamaica, who stated that the priority of the Caribbean countries is to reduce food imports and achieve greater food security. Fellow Caribbean minister, Weir of Barbados, called attention to the vulnerability of these island states to climate change and the need to generate mechanisms to facilitate the recovery of farmers following extreme climate events.

Bolivia’s Director of Agricultural Rural Development, Orland Achú, revealed that in his country most producers are small farmers and that they should be the primary beneficiaries of public policies.

On the other hand, Manuel Otero stressed IICA’s role as a builder of bridges, assisting countries to arrive at a unified message to ensure that agricultural producers are duly represented in global discussion forums. “These are challenging times and the 16 messages reflect the spirit of unity of a region that is aiming to be a leading player and not a spectator in the events that will take place”, he remarked, reaffirming that agriculture is a strategic sector for the Americas – a region destined to be the guarantor of global food security and nutrition and the environmental sustainability of the planet.

Featured Image – The participants who were physically present at the meeting at the Embassy of Brazil in Rome were Ministers of Agriculture Luis Basterra of Argentina; Santiago Bertoni of Paraguay; José Ángel López of Guatemala; Tereza Cristina Correa of Brazil; Tanlly Vera of Ecuador; and Mauricio Guevara of Honduras; in addition to Manuel Otero, Director General of IICA, and Lourdes Cruz, Director of International Affairs at SADER in Mexico.