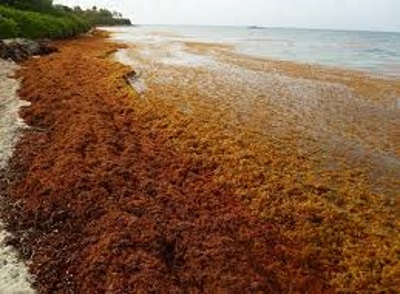 Countries underscore need to deal with Sargassum and illegal fishing

The Belize-based the Caribbean Regional Fisheries Mechanism (CRFM) says regional countries have agreed that urgent action is needed on multiple fronts to address the Sargassum problem.

It said that the countries have also highlighted the need for support from international development partners.

The CRFM said that the Sargassum problem as well as Illegal, Unreported and Unregulated (IUU) fishing were among the agenda items discussed during the 13th regular meeting of the Ministerial Council of the CRFM held in St. Kitts-Nevis last weekend.

CRFM executive director, Milton Haughton, told the meeting “we are establishing a solid foundation and a strong regional policy framework within the context of the Caribbean Community Common Fisheries Policy that should guide our actions over the next 10 to 20 years in achieving our developmental objectives in fisheries and aquaculture”.

Haughton added that it is only through joint efforts that the region can resolve problems such as those associated with climate change, IUU fishing, and the Sargassum inundation.

In relation to IUU fishing, Jamaica spoke of the problems that the island recently faced as a result of fishing vessels from countries such as Honduras, Nicaragua and Venezuela coming into its territorial waters.

Jamaica has had to extend the close-season for the Queen Conch fishery indefinitely, due to the adverse effects of IUU fishing on stock abundance, the CRFM statement noted.

It said the Ministerial Council “affirmed that IUU fishing is a major problem affecting Queen Conch fisheries in the region and highlighted the need to more aggressively pursue national and regionally coordinated action to combat IUU fishing and protect the fisheries resources, including direct engagement with the flag States of the IUU vessels and the market states where the IUU catches are exported.”

It also endorsed the collective regional efforts to engage both the market states where IUU fish is sold and the IUU fishing nations for conch, lobster and other high-value species.

The meeting also considered scientific advice and recommendations from the Caribbean Fisheries Forum, held in Basseterre earlier this year.

“This included measures to improve the resilience of fishing communities and marine ecosystems to climate change, as well as actions being taken to improve adaptation and disaster risk response. “Furthermore, it deliberated upon actions needed to improve the conservation and management of fisheries resources and ecosystems; strengthen systems for evidence-based decision making; promote the blue economy; and strengthen partnerships with development partners and donors,’ CRFM added.