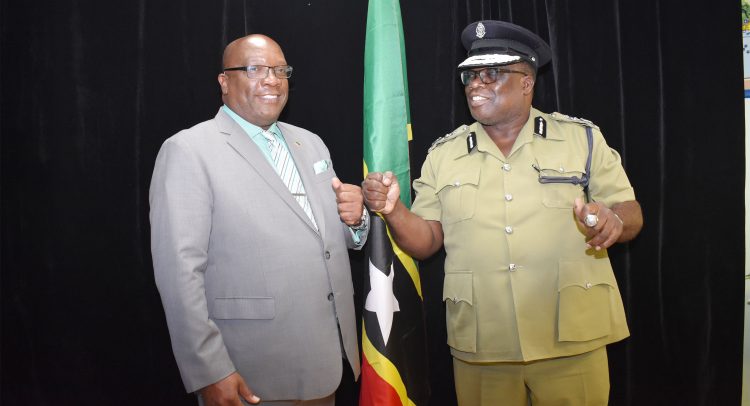 BASSETERRE, ST. KITTS, January 15, 2021 (MMS-SKN) — Prime Minister and Minister of National Security, Dr the Hon Timothy Harris, on Thursday January 14 informed the nation that major crimes have been trending downwards and his Team Unity Administration will endeavour to further enhance the safety and security of St. Kitts and Nevis.

Speaking at his first monthly press conference for the Year 2021, which was held at NEMA’s conference room in Lime Kiln, West Basseterre, Prime Minister Harris while thanking members of the police force for the role they have played in bringing down major crimes he also advised citizens and residents that they too can contribute to crime reduction.

According to the Honourable Prime Minister, Year 2020 ended with a 20 percent reduction in major crimes when compared to 2019, while the detection rate for homicides rose to 40 percent. He advised that this is the third year in a row the country has experienced a significant reduction in overall major crimes, noting that apart from homicides there are 14 categories of major crimes.

“We hope in due course to further enhance the safety and security of St. Kitts and Nevis to such an extent that homicides are reduced to single digits,” said Dr Harris. “Indeed in the ideal world, we would wish that there be none. In secular world there will be and so the realistic expectation is that we will keep homicides in our country as low as possible and we are working hard to do that.”

He further informed the nation that the Police are making progress in the investigation on the two recent homicides in Basseterre. He however reminded citizens and residents that each of them can contribute to crime reduction if they practise to say something when they see a crime being committed or when they become privy to any information on it.

“No one must be allowed to take another’s life with impunity, and the law must take its course,” cautioned Prime Minister Harris. “We must never recoil from seeking peace and pursuing it. We continue to work hard to make St. Kitts and Nevis the safest small island state in the world.”

He added: “We commiserate of course with all families who have lost loved ones due to violent crime, and we promise never to relent in our efforts to eradicate violent crimes from our society here in St. Kitts and Nevis.”

In a more positive note, Prime Minister and Minister of National Security Dr the Hon Timothy Harris advised that Her Majesty the Queen had graciously considered the recommendation from his Cabinet through the Governor General His Excellency Sir S.W. Tapley Seaton, GCMG, CVO, QC, JP, LL.D that Mr Hilroy Brandy, the Commissioner of Police – who was present at the press conference – be awarded the Queen’s Police Medal (QPM) on account of his distinguished and meritorious law enforcement service spanning some 39 years.

“Mr Brandy’s excellent record in law enforcement has finally received the recognition and acclaim of Her Majesty,” observed Prime Minister Harris. “I want to commend him on this significant conferment at this time in his career, and of course on behalf of all of us at Cabinet I extend to you again, Commissioner Brandy, our most sincere congratulations and best wishes.”

What should I know about COVID-19 vaccines if I’m pregnant?