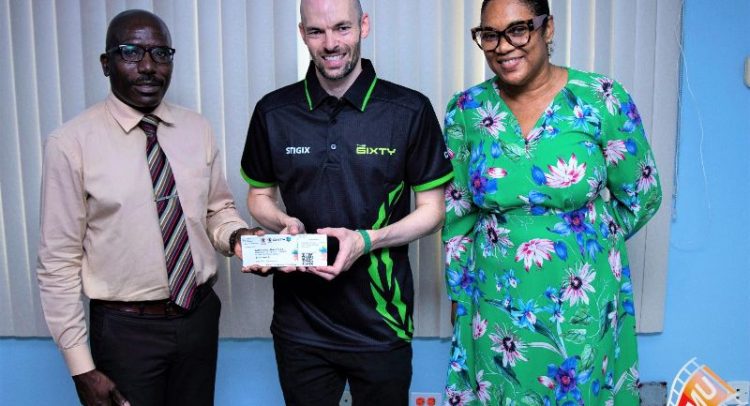 Public primary school students and young cricketers across St. Kitts and Nevis will be attending the exciting cricket matches to be staged by the Caribbean Premier League (CPL) from August 24 to September 04, 2022, at the Warner Park Cricket Stadium.

At a brief handover ceremony on Monday, August 22, 2022, Chris Watson, Head of Marketing at CPL, presented close to 1,500 hundred tickets to Francil Morris, Chief Education Officer at the Ministry of Education. Valencia Syder, Permanent Secretary in the Ministry of Sports, witnessed the handover. The tickets will allow 200 students per day to attend the new Sixty tournament – a 10-over competition running from August 24 to 28.

One hundred tickets per day have also been set aside for students to attend the CPLT20 tournament, which features men, and for the first time, a women’s field, contesting 20 overs per side. The St. Kitts leg of the CPLT20 tournament runs from August 31 to September 04, 2022. Several tickets were also allocated for students at the respective cricket academies in St. Kitts and in Nevis.

Mr. Watson said he was looking forward to the involvement of the young people in the sport.

“We’re really delighted to be able to contribute to that development in St. Kitts and Nevis, and that’s testament to the fantastic support we have had throughout the years of CPL from the government here,” he said. “We’re really looking forward to welcoming these kids to our games across nine exciting game days of cricket here in St. Kitts and Nevis at Warner Park for both The Sixty and CPL, and we’re going to be putting on great entertainment for them – face painting, snack boxes and goodie bags for the kids.”

Chief Education Officer Morris thanked CPL for the donation on behalf of the Ministry of Education.

“It is my hope that having participated or viewed these matches, there will be a greater interest in cricket among our younger students in our schools,” Mr. Morris stated while wishing the tournament every success.

This year’s edition of CPLT20 is expected to generate great interest from casual and ardent local cricket fans as St. Kitts and Nevis Patriots are the defending champions. Supporters, team management and players will be hoping for a repeat of the success at the 2021 tournament.