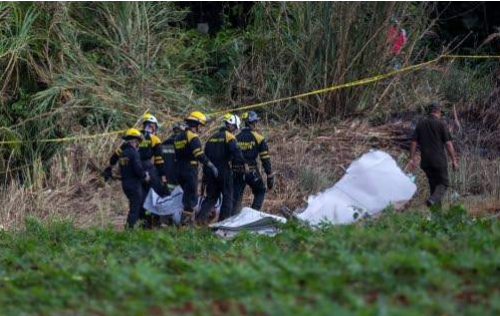 Cuba now has identified the remains of 50 of the 111 people killed in the country’s worst air disaster in decades.

A Boeing 737 leased to national carrier Cubana de Aviacion crashed shortly after taking off from Havana’s Jose Marti airport on Friday, with 113 passengers and crew aboard.

Just two survivors remain — both Cuban woman who are fighting for their lives at Havana’s Calixto Garcia hospital.

“I can inform you that we have identified 50 of the bodies through Tuesday midday,” Forensics Office Director Sergio Rabell told a news conference.

Still awaiting identification are the remains of a couple from Argentina, a Mexican tourist, a passenger from Western Sahara, and some 50 Cubans, Rabell added.

The Cuban government is investigating the cause of the crash and some of those killed have already been buried.

Transport Minister Adel Yzquierdo has said one of the plane’s two black boxes had been recovered in “good condition,” and the other was likely to be found. Their data will be key to determining what happened.

The 39-year-old plane, leased from a Mexican company, Global Air, was on a domestic flight to the eastern city of Holguin, where most of the passengers were from.

In Mexico, Global Air’s operations were suspended so that Mexican aviation authorities can run inspections of the aircraft it leases following the tragedy in Cuba.

The review will again inspect aircraft already certified as safe to fly, and assist as needed in the investigation of the accident in Cuba, a company statement said.

Built in 1979, according to the Mexican government, the Boeing 737 that crashed last passed inspection in November 2017.

The accident happened Friday at 12:08pm (1608 GMT). The plane crashed in a potato field close to Havana’s airport. Witnesses and airport officials told AFP that the aircraft plunged as it was making its first turn after take-off.

Most of the plane was reduced to a mangled carcass of burned metal. It came down just 200 meters (yards) from houses between the Boyeros and Santiago de Las Vegas districts south of Havana.