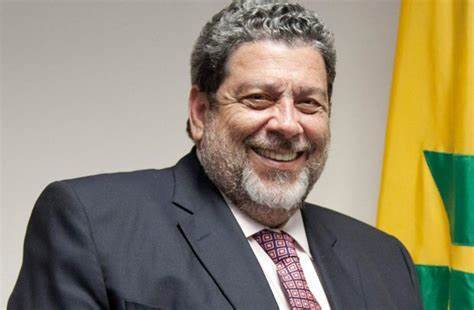 By Dr. The Hon. Ralph E. Gonsalves Prime Minister of Saint Vincent and the Grenadines

Address to Parliament on the Occasion of the State Visit of His Excellency Miguel Diaz-Canel, President of the Republic of Cub

Madam Speaker, Honourable Members, the government and people of St. Vincent and the Grenadines enthusiastically welcome to our Parliament and our free and independent nation, my friend and a steadfast friend of St. Vincent and the Grenadines, His Excellency Miguel Diaz-Canel, the esteemed President of the Republic of Cuba, his dear wife, and his distinguished delegation.

Your Excellency, as a living embodiment and continuator of heroic and dignified, revolutionary Cuba — the Cuba of José Marti, Antonio Maceo, Fidel and Raúl — we embrace you in love and enduring solidarity which will never be shaken.  You are the first Cuban President to visit us; it is an occasion of enormous political, diplomatic, and practical significance.

You, my dear friend Miguel, are in the land of the indomitable Joseph Chatoyer, our heroic and iconic exemplar of the anti-colonial struggle of our people in our ever-resolute quest to defend our sovereignty, independence, and right to self-determination in the interest of our people’s humanisation and their further ennoblement.  This small country, St. Vincent and the Grenadines, a magnificent component of our Caribbean civilisation, stands askance against those who seek to enthrone imperialism, hegemony, and anti-people backwardness.

Undoubtedly, your visit to us will strengthen, indeed fortify, immeasurably, the already excellent relations which exist between our two countries.  These bonds of friendship are grounded in high principle, mutual respect, multilateralism, the fundamental tenets of the Charter of the United Nations, our Caribbeanness, and our strivings for peace, justice, security, and prosperity for all.  Differences in our political and economic systems have never hampered us in the building of our ties that bind.

Earlier this year, on May 26th, Cuba and St. Vincent and the Grenadines celebrated thirty years of diplomatic relations between our two countries.  Tomorrow, in Barbados, at the 8th Cuba-CARICOM Summit, we mark the 50th anniversary of the establishment of diplomatic relations between Cuba and the four independent English-Speaking Caribbean countries at that time — Barbados, Guyana, Jamaica, and Trinidad and Tobago.

But long before the establishment of diplomatic relations between Cuba and St. Vincent and the Grenadines in 1992, commendably,  under the administration of Sir James Mitchell — indeed as long ago since the late 19th century into the early 20th century — there were people-to-people connections between our two countries.  Significant migration of Vincentian workers to Cuba, particularly for the sugar industry, occurred.  The father of the celebrated Cuban heavyweight boxer, Theophilo Stephenson, was such a migrant who hailed from Biabou.  Many children, grandchildren, and great grandchildren born in Cuba of Vincentian migrants have now chosen to come to St. Vincent and the Grenadines to live and work, but they have not abandoned their commitment to Cuba and its Revolution.  So, too, the spouses of Vincentians who went to Cuba from the late 1970s onwards, are living and working in St. Vincent and the Grenadines with their respective husbands or wives.  A people-to-people linkage has evolved markedly, and beautifully!

From the 1960s onwards, anti-Cuban sentiment in the Caribbean was hugely manufactured, propagated, and encouraged by imperialism and its regional allies, particularly after the Bay of Pigs invasion by mercenaries and assorted anti-revolutionary Cubans in Miami backed by the United States of America and after, too, Fidel’s declaration in April 1961 of the socialist character of the Cuban Revolution.  Independent and revolutionary Cuba was thus drawn into the vortex of the bi-polar Cold War.

[Unequivocally, through its principled internationalist solidarity, revolutionary Cuba sided with the anti-colonialist and anti-imperialist forces globally, especially in Latin America, the Caribbean, Africa, and Asia.  On account of all this, Cuba’s nobility, dignity, and selflessness were unjustifiably impugned.  Imperialism’s slander of Cuba became routine and dangerous; it still is.]

In St. Vincent and the Grenadines, it was not until the early-to-mid 1970s, and thereafter, that anti-imperialist organisations and parties such as the Youlou Liberation Movement (YULIMO), the United People’s Movement (UPM), the Movement for National Unity (MNU) and personalities therein, began a concerted push-back against imperialism’s jaundiced mantras on revolutionary Cuba.  This anti-imperialist rebuff of the Americans’ narrative on Cuba was paralleled across our region, bolstered by the selflessness and successes of revolutionary Cuba and growing Latin American solidarity.

[The UPM, the MNU, and subsequently the ULP established party-to-party links with the Communist Party of Cuba and the outreach agencies of the Cuban government.  Scholarships from the Cuban government for our students to study in Cuba were organised initially through the UPM.  After the formal establishment of diplomatic relations in May 1992, the programme evolved further.]

The election of the ULP government in March 2001, heralded a massively ramped-up, many-sided bundle of relations between St. Vincent and the Grenadines and Cuba.  In September 2001, I led a governmental, business, and cultural delegation to Cuba within a week or so of the terrorist attack on the United States of America on September 11, 2001.  The perennial critics at home, in orchestration with imperialism abroad, questioned the timing of our visit to Cuba so close to the terrorist attack on the Twin Towers in New York City.  They posed the absurd and irrelevant query: “What would America say?” This nonsensical, pro-imperialist question ignored the fact that Fidel himself had promptly condemned this act of terrorism.

Between then and now, our relations with Cuba have grown by leaps and bounds.  Among the centre-pieces of these enhanced relations of immense practical benefit to St. Vincent and the Grenadines include:

Truly, this has been, and is, Christianity in action!

In the field of construction, the monumental achievement is the historic Argyle International Airport (AIA).  Undoubtedly without the support of Cuba and Venezuela it would have been impossible to proceed.  Considerable assistance from Trinidad and Tobago and Taiwan, among other countries, was also vital.  In gratitude, large photographs of Fidel, Hugo Chavez, and Patrick Manning adorn a prominent internal wall at AIA; so, too, a plaque in appreciation of Taiwan’s contribution.

Regionally, in the Caribbean and Latin America, Cuba, St. Vincent and the Grenadines, and like-minded countries have worked assiduously to deepen regional integration and to strengthen the functioning of the Association of Caribbean States (ACS); to establish the ALBA (the Bolivarian Alternative for Our America); and to fashion a broad-based political umbrella known as the Community of States of Latin America and the Caribbean (CELAC) — outside of the clutches of North America in the hemispheric Organisation of American States (OAS).

St. Vincent and the Grenadines unequivocally rejects and condemns the persistent efforts of the United States of America to interfere and intervene in the internal affairs of Cuba.  St. Vincent and the Grenadines stands with the overwhelming majority of the member-states of the United Nations (including traditional friends of the USA) in the denunciation of the criminal economic embargo, the illegal, unilateral sanctions against Cuba, and the absurd declaration of Cuba as a state-sponsor of terrorism.  Indeed, Cuba has been a victim of terrorism, supported by agencies of the US government, as for example, the blowing-up of the Cubana aircraft off the coast of Barbados in October 1976, and the hundreds of assassination attempts against the Cuban leaders, especially Fidel Castro.

St. Vincent and the Grenadines considers it unacceptable in international law, and immoral, for the USA to label the Cuban internationalist brigades of doctors, nurses, engineers, and other professionals to be victims of human trafficking.  In this absurd way, the USA unwittingly devalues the genuine fight against human trafficking globally.

As I have made it repeatedly clear in regional and global fora, although St. Vincent and the Grenadines and the USA have close economic, political, and people-to-people links, our country cannot reasonably be expected to have its foreign policy in relation to Cuba determined or constrained by the presidential, senatorial, congressional, and gubernatorial politics of South Florida.  It is high time that the USA effect an appropriate rapprochement with Cuba on the basis of mutual respect and dignity as befitting the peoples and governments of two great countries — Cuba and America. Such an eventuality would greatly please St. Vincent and the Grenadines.  After all, we are friends of all; and we strive for a better world.

The foregoing issues and considerations have helped to shape the discussions which the President of Cuba and I, and our respective delegations, have had over the past two days.  St. Vincent and the Grenadines reaffirms its commitment to fortifying further Cuba-SVG relations in every material particular.

As I conclude, I advise this Parliament and our region of small nations, aptly, of the immortal words of the Cuban revolutionary patriot and national hero, José Marti, in his celebrated essay entitled “Our America” written in 1891:

“The prideful villager thinks his hometown contains the whole of the world; as long as he can stay as mayor or humiliate the rival who stole his sweetheart, or watch his nest egg accumulating in its strong box, he believes the universe to be in good order, unaware of the giants in seven-league boots who can crush him underfoot or the battling comets in the heavens that go through the air devouring the sleeping worlds.  Whatever is left in that sleepy hometown in our America must awaken.  These are not times for going to bed in a sleeping cap —-, without our weapons for a pillow, weapons of the mind, which vanquish all others.  Trenches of ideas are worth more than trenches of stone —-.  A vital idea set ablaze before the world at the right moment can, like the mystic banner of the last judgment, stop a fleet of battleships.”

Ideas, my friends, my colleagues, are of inestimable value.  The principal one, in our context, is that of solidarity — solidarity with and among people within our nations, and between like-minded nations, around the banner of peace, justice, prosperity, security, and sustainable development for all, not for a few and not for only a few in rich, powerful nations.

Long live the internationalist solidarity between revolutionary Cuba and St. Vincent and the Grenadines.  Long Live!
Thank you!