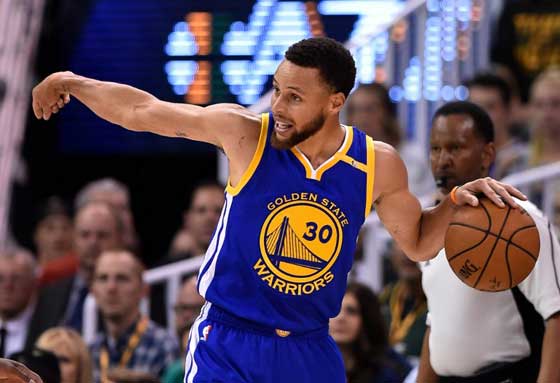 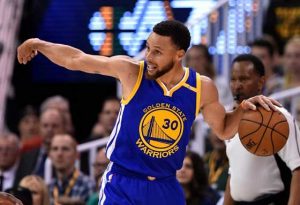 The Celtics sought a third win in as many seasons on the Warriors’ home court and could have become the first team since the 2013-14 season to sweep a season series from Golden State.

But Curry seized command in the second half, outbattling Celtics star Kyrie Irving in a game that could be a preview of June’s NBA Finals.

“We bring the best out of each other,” Curry said. “He’s an amazing type of player who can do some crazy things on the floor. That’s what the NBA is all about every night.”

The Celtics, down 10 points in the fourth quarter, rallied to lead briefly before Curry took charge.

Late free throws by Curry put the Warriors ahead 105-101 but Terry Rozier’s 3-pointer pulled Boston within a point with 7.7 seconds remaining, forcing Curry to sink four more in the final seconds to seal the triumph.

“This is like a playoff-type game,” Curry said. “This prepares us for what it’s going to be like in April, May and June.

“I’d like to say we sent a message that we’re still going to be in it but we have got a lot of work to do.”

The Warriors are trying to reach the NBA Finals for the fourth consecutive season and capture their third crown in four tries.

“We’ve got the rhythm and we’re trying to do something special again this year,” Curry said.

Boston led 54-50 at half-time but Curry scored 18 points in the third quarter and the Warriors outscored Boston 30-19 in the period to grab an 80-73 edge.

“We played defence,” Warriors coach Steve Kerr said in explaining the surge. “Finally started getting some stops so we could get out in transition.

“They made a ton of shots early. We just stayed with it and got going.”

Boston opened 6-of-7 and 10-of-13 from the floor against the NBA’s top defensive club, Irving starting out 7-for-7.

Russell Westbrook had a triple double with a game-high 31 points plus 11 rebounds and 13 assists in Oklahoma City’s 121-108 victory at Detroit.

Paul George added 26 points and Carmelo Anthony had 21 for the Thunder. Anthony became the 21st player in NBA history to reach the 25,000 career-point mark.

Victor Oladipo scored a game-high 24 points and the host Indiana Pacers rallied from a 21-point deficit to defeat Orlando 114-112.

The Magic had their chances late but Aaron Gordon, who led Orlando with 22 points and 11 rebounds, missed two free throws with 7.9 seconds remaining and Jonathan Simmons missed a final 3-point attempt.

Miami, powered by 19 points from Josh Richardson and 17 from Wayne Ellington, closed the game with an 8-1 run to beat visiting Charlotte 95-91.

Richardson followed back-to-back layups with a free throw to give the Heat a 92-90 lead. Kemba Walker, who scored a game-high 30 points, made 1-of-2 free throws to pull the Hornets closer but Ellington sank a 3-pointer with 4.6 seconds to play to seal the victory.