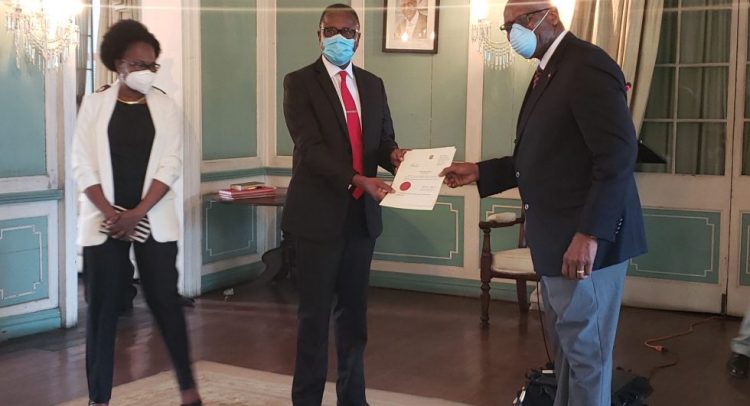 Two months before his suspension from ministerial duties was slated to come to an end, Dean Jonas has been appointed Minister of Social Transformation and the Blue Economy.

Yesterday, the former Minister of Agriculture, who was sworn in by Governor General Sir Rodney Williams at Government House, expressed gratitude to Prime Minister Gaston Browne for his “graciousness”.

“I will certainly try my best to perform in a way that will build our economy, grow our economy and improve the livelihood of all our people in Antigua and Barbuda,” Jonas said.

He told the media that although he believes that his new portfolio will come with its fair share of challenges, “it’s something that I know I can handle very well”.

Jonas, who has a background in technology, engineering and mathematics, said his “analytical skills will play a key part in my ability to perform”.

He said the decision to change his portfolio was one that Browne had been mulling over.

“Clearly what he [the PM] intends to do is to rebuild our economy to take advantage of all our resources that are available to us and that is why we have the appointment of the blue economy,” Jonas said.

‘Blue economy’ relates to the management and sustainable use of ocean resources.

“The Prime Minister has wisely moved to make this appointment at this opportune time to ensure that the country is going to be ready for this hurricane season,” he continued.

The Member of Parliament for St George’s also iterated that “team effort is important in everything”.

He thanked his constituents “for their unwavering support” and pledged to collaborate with ministry staff “to help, especially the unfortunate members of our society”.

Jonas said his first order of business is to sit down with staff and set goals to tackle poverty and prepare for the upcoming hurricane season.

His new responsibilities include social welfare, poverty eradication, care of the elderly, drug rehabilitation, disaster preparedness and the youth department, among others.

On January 20 of this year, Browne wrote to the Governor General advising him “to terminate the duties and responsibilities” of Jonas claiming he had taken decisions “that are inimical to good governance” and had failed to maintain a good working relationship with his staff. Browne said Jonas’s six-month suspension period was for reflection and contemplation as to how to achieve reconciliation. Minister Samantha Marshall took over the Agriculture, Fisheries and Barbuda Affairs portfolio in the meantime, in tandem with her existing Ministry of Social Transformation.

Little Richard to be buried at historically black college