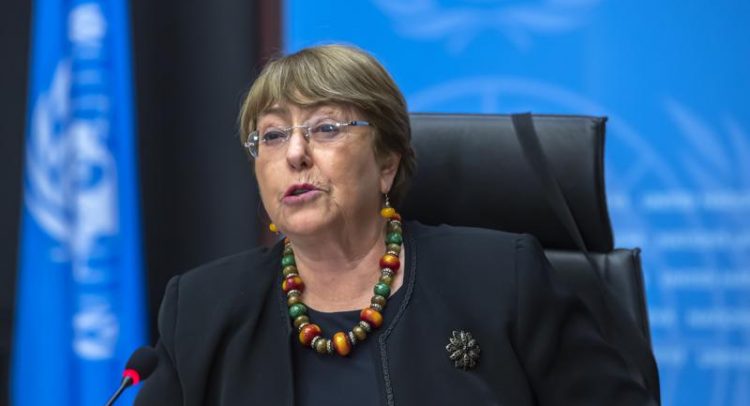 GENEVA (AP) — The U.N.’s top human rights body opened its latest session on Monday and was immediately embroiled in a debate over the representation of Myanmar, where a military takeover toppled the civilian government in February.

Western countries said two planned debates about the human rights situation in Myanmar during the Human Rights Council’s 3-1/2 week session should go forward, even without the country represented. But China, the Philippines and Venezuela insisted it should be on hand.

The showdown delayed the opening statement to the council from the U.N. human rights chief, Michelle Bachelet, who aired concerns about human rights in places like China, Mexico, Russia, Sri Lanka and Ethiopia’s Tigray region. She said she hoped to address Myanmar and other rights issues in places like Ukraine, Nicaragua and Iran later during the session.

Myanmar hasn’t been represented at the U.N. in Geneva since the civilian government’s ambassador left after the junta took over. The U.N. General Assembly’s credentials committee is facing a decision about which representation of Myanmar will be recognized.

“If we exclude the country concerned, this is not fair,” said Ambassador Chen Xu of China, urging the debates on Myanmar to be put off until the council’s next session in September.

But Western envoys insisted the rights situation in Myanmar was urgent, notably over alleged rights violations such as those suffered by the Muslim Rohingya minority and — more recently — protesters against the military takeover who have faced a deadly crackdown.

“We recognize that we are dealing with an unusual set of circumstances that have not arisen before,” said Rita French, Britain’s international ambassador for human rights. “(But) the reason why two dialogues were mandated just a few months ago is because there is a human rights crisis in Myanmar.”

Envoys agreed to maintain the council’s schedule that includes the two debates on Myanmar. But the council president, Ambassador Nazhat Shameem Khan of Fiji, acknowledged her office would continue to assess whether they would proceed, and said the plans could still change.

Pressure has been growing against Myanmar’s military. In a rare move, the U.N. General Assembly on Friday condemned the takeover and called for an arms embargo against the country in a resolution that demanded the restoration of the country’s democratic transition.

Bachelet, in her remarks, also expressed concerns about the arrest of 107 people under a new security law in Hong Kong, saying a first trial expected later this week would be an “important test of independence for Hong Kong’s judiciary.”

She called on Russia to uphold “civil and political rights” and said she was “dismayed” by new measures that could curb people’s right to express critical views and take part in Russia’s parliamentary election in September.

She noted a Russian court decision that labeled an anti-corruption foundation led by opposition figure Alexei Navalny as an “extremist organization” and urged Russian authorities “to end the arbitrary practice” of labelling individuals, journalists and NGOs “as extremist foreign agents or undesirable organizations.”

On the situation in Ethiopia’s Tigray region, she lamented “continued reports of serious violations of international humanitarian law and gross human rights violations and abuses against civilians by all parties to the conflict,” including by Ethiopian government forces.

“Credible reports indicate that Eritrean soldiers are still operating in Tigray and continue to perpetrate violations of human rights and humanitarian law,” she said, referring to troops from neighboring Eritrea. She said 350,000 people are threatened by famine.

Since mid-May, her office has had staffers in Tigray as part of a joint investigation with the Ethiopian Human Rights Commission that is expected to finish in August.

FILE – In this Wednesday, Dec. 9, 2020 file photo Michelle Bachelet, UN High Commissioner for Human Rights, speaks during a press conference at the European headquarters of the United Nations in Geneva, Switzerland. The U.N.’s top human rights body opened its latest session on Monday, June 21, 2021 and was immediately embroiled in a debate over the representation of Myanmar, where a military takeover toppled the civilian government in February. (Martial Trezzini/Keystone via AP, file)