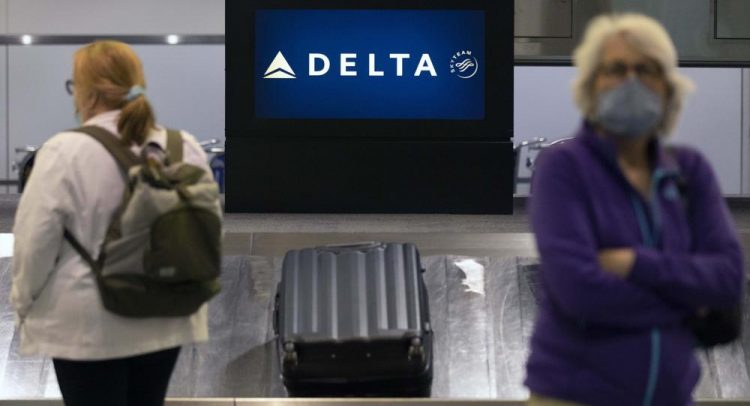 Delta Air Lines posted a $1.2 billion profit for the third quarter on Wednesday, helped by the latest installment of federal pandemic aid for the airline industry, but warned that rising fuel prices will lead to a “modest” loss in the fourth quarter.

The airline also expects higher labor costs as it hires thousands of employees to replace some of those who left the company last year, when the pandemic’s impact on travel was most brutal.

The airline said that travel demand is improving after hitting a flat spot when COVID-19 infections in the U.S. jumped over the summer, fueled by the rise of the so-called delta variant.

“We are seeing bookings pick up materially over the past four or five weeks,” CEO Ed Bastian said. “As the variant has receded, people are starting to get back out.”

Business and international travel continue to lag, however — corporate travel stalled at about 40% of its pre-pandemic level. Airlines are hoping for a boost as more workers return to their offices and as the U.S. relaxes border restrictions in November.

Delta is rebuilding more of its previous schedule. The airline operated at 71% of its 2019 passenger-carrying capacity in the third quarter and expects that to rise to 80% in the fourth quarter. That will help revenue rise slightly, to more than 70% of where it stood in late 2019, the airline forecast.

For the most part, Delta has avoided the high numbers of canceled and delayed flights that have affected rivals, like the meltdown that caused Southwest Airlines to cancel nearly 2,400 flights from Saturday through Monday. Delta had just over 20 cancellations in the same three days, according to FlightAware. In a thinly veiled critique of Southwest, Bastian said Delta has been more conservative about adding flights until it has enough employees to operate them.

“Some carriers have tried to be opportunistic over the course of the pandemic to take market share, and some carriers have been a little more disciplined,” he said during an interview. “I think you see the effects.”

Delta is also setting its own course on vaccine policy. The company is pushing employees to get vaccinated against COVID-19 and will impose a $200 monthly health insurance surcharge on unvaccinated employees next month.

But unlike its rivals — and in a seeming challenge to the White House — Delta continues to offer regular testing as an alternative to the shots. Major U.S. carriers have government contracts to provide airlift flights, and a recent order by President Joe Biden requires federal contractors to vaccinate their employees by Dec. 8; testing is not an option for contractors and their employees.

Bastian said he has discussed the matter with administration officials, but he declined to detail those talks. He argues that if Delta can ensure that a very high percentage of employees get vaccinated, that should be good enough. He said 90% of Delta employees are already vaccinated and it will be 95% by November.

Delta’s third-quarter profit of $1.21 billion was down 19% from the same quarter in 2019. The Atlanta-based carrier received $1.82 billion in federal grants from a special program that Congress and the Trump and Biden administrations approved to cover most of the airline industry’s labor costs.

Without that aid and other special items, Delta said it would have earned $216 million, or 30 cents per share. That beat the forecast of 15 cents per share from 17 analysts surveyed by FactSet.

Revenue including from Delta’s refinery and investments totaled $9.15 billion, down 27% from the same quarter in 2019. Passenger revenue was off 37%.

Delta expects jet fuel prices to rise the rest of the year and other expenses to jump by 6% to 8% over the same quarter in 2019 on a per-seat basis. Mostly that is the cost of hiring new workers. Airlines that took federal pandemic relief have been barred from furloughing employees, but they offered incentives last year that convinced tens of thousands to quit.

Passengers wait for luggage in the arrival area of Delta Air Lines, Monday, July 12, 2021, at Logan International Airport in Boston. Delta Air Lines is reporting a $1.2 billion profit for the third quarter, thanks in large part to federal aid to help the industry get through the pandemic. Delta said Wednesday, Oct. 13, that travel demand is improving after flattening out in late summer, when coronavirus cases spiked in the U.S. (AP Photo/Michael Dwyer)

Sweden U21 player says he was racially abused by opponent