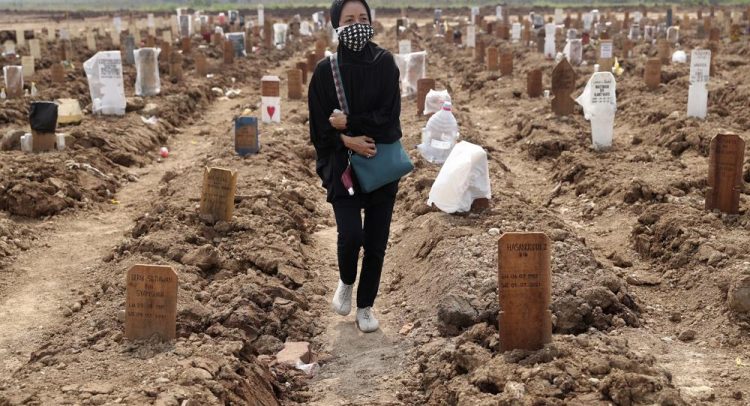 JAKARTA, Indonesia (AP) — With his aunt gasping for breath at home from her COVID-19 infection, 17-year-old Ridho Milhasan took matters into his own hands Wednesday and went to find her some oxygen.

After his uncle scrounged an empty tank from a friend, Milhasan found an oxygen filling station in southern Jakarta, waited in the long line of others also in desperate need, and emerged triumphantly after three hours with the supply he needed.

“My aunt badly needed this oxygen,” he said before strapping the oxygen container to his small scooter. “This pandemic is getting dire.”

Across Indonesia the coronavirus is again spreading rapidly, and Wednesday was the country’s deadliest day since the start of the pandemic with 1,040 reported deaths. Hospitals are bursting beyond capacity and oxygen supplies are running out, leaving people like Milhasan to do what they can to care for sick friends and relatives at home.

In Milhasan’s case there was no other option — his uncle tried to get his aunt into multiple hospitals in Jakarta after she tested positive for COVID-19, but was turned away and told to find an oxygen tank and help her at home.

“COVID-19 patients have had difficulties to get proper medical services,” Milhasan said. “Now they have to find their own oxygen.”

Despite new lockdown measures and pledges from the government to provide more hospital beds and supplies, there’s no indication of that trend slowing.

“This is our critical period during the next two weeks,” Luhut Binsar Pandjaitan, the government minister in charge of Indonesia’s pandemic response, told reporters on Tuesday. He pledged to move quickly to provide more hospital beds, healthcare equipment and oxygen.

In the capital, daily burials have increased 10-fold since May, said Ngabila Salama, head of surveillance and immunization at the Jakarta Health Office. Of the 369 COVID-19 fatalities in Jakarta reported Saturday, 45 people died at home, she said.

“We are worried that this is the tip of the iceberg,” said LaporCOVID-19, an independent virus data group that keeps track of deaths at home, noting that many go unreported. “This must be addressed immediately to prevent more people from dying outside of health facilities.”

Overall, Indonesia, the world’s fourth-most populous country, has reported nearly 2.4 million infections and almost 63,000 fatalities from COVID-19. Those figures are widely believed to be a vast undercount due to low testing and poor tracing measures.

With the health care system struggling to cope with the ever-rising numbers, even patients fortunate enough to get a hospital bed are not guaranteed oxygen.

Over the weekend, at least 33 patients with severe coronavirus infections died after the central supply of liquid medical oxygen ran out at a hospital in Yogyakarta.

Indonesia’s Hospital Association said the problem is widespread, with many hospitals’ oxygen supplies running close to empty overnight before morning supplies are delivered.

“We need the government’s guarantee that the distribution of medical oxygen can reach hospitals as needed and in time,” said the association’s secretary general, Lia Partakusuma.

Across Java, Indonesia’s most populous island, hospitals began erecting tents in mid-June as makeshift intensive care units, and many patients waited for days before being admitted. Oxygen tanks were rolled out on the sidewalk for those lucky enough to receive them, while others were told they would need to find their own.

Health Minister Budi Gunadi Sadikin told a parliamentary commission overseeing health issues on Monday that his ministry has set up a special unit to deal with oxygen supplies amid a dramatic spike in cases on Java and Bali islands.

“We have identified oxygen needs in each hospital, and set up oxygen task forces in each province,” Sadikin said in a virtual hearing with the lawmakers.

Sadikin said the Industry Ministry has been asked to dedicate 90% of oxygen production to medical oxygen, from the current 25%, where the rest is produced for industrial purposes. The daily need of COVID-19 patients is 1,928 tons a day, while the country’s total available production capacity is 2,262 tons a day, according to government data.

He said the scarcity of oxygen in several areas was largely due to distribution not keeping up with skyrocketing demand, and pledged the government would “take all efforts to fix it and speed up distribution to areas with high virus infection cases.”

A woman walks among the graves of COVID-19 victims at the Rorotan Cemetery in Jakarta, Indonesia, Wednesday, July 7, 2021. Across the country, the coronavirus pandemic is again spreading rapidly with bursting beyond capacity and oxygen supplies are running out, leaving people do what they can to cope with caring for sick friends and relatives at home. (AP Photo/Tatan Syuflana)