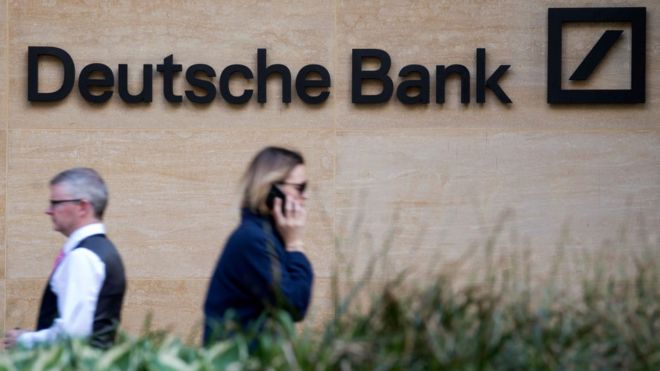 Deutsche Bank has said it will cut more than 7,000 jobs as Germany’s biggest lender attempts to return to profit.

Following a review of the business, the number of jobs in Deutsche’s equities sales and trading business is being cut by a quarter.

The bank – which employs 8,500 people in the UK – did not say which countries would be affected by the job cuts.

The bank had already flagged up that job cuts were on the way last month, with chief executive Christian Sewing saying at the time that they would be “painful but regrettably unavoidable”.

On Thursday, Mr Sewing said: “We remain committed to our Corporate & Investment Bank and our international presence – we are unwavering in that.

“We are Europe’s alternative in the international financing and capital markets business. However, we must concentrate on what we truly do well.”

The job cuts are the first major move by Mr Sewing, who took up the role last month after his predecessor, John Cryan, was sacked.

The search for his replacement is understood to have begun after the bank reported an annual loss of €500m (£438m) at the end of February. That followed losses of €1.4bn in 2016, and €6.8bn in 2015 after restructuring and litigation costs.

At the meeting, the bank’s chairman, Paul Achleitner, said that while Mr Cryan had “set the ball rolling” on reform, he had displayed “shortcomings in decision-making and implementation”.

“You are right to expect the bank and its management to hit the targets it has set itself,” he said. “If there are signs those targets are in jeopardy… then we on the supervisory board have to act swiftly and decisively.”