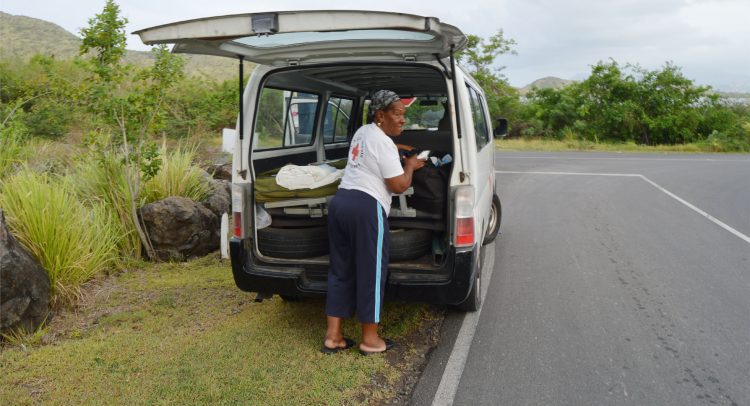 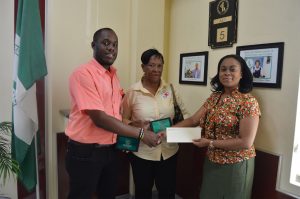 Basseterre, St. Kitts*, *July 6, 2018 (DBSKN)* — Following a timely involvement by the St. Kitts and Nevis Red Cross Society when the Development Bank of St. Kitts and Nevis (DBSKN) recently held the successful Iron Walk from Frigate Bay to Major’s Bay in the Southeast Peninsula for Board, Staff and their families members, a much needed partnership is in the offing between the two civic minded organisations.

The Development Bank of St. Kitts and Nevis was established by an Act of Parliament NO. 1 of 1981 and opened its doors to the public on May 22 of the same year, and this anniversary date is observed every year with a number of activities. One of this year’s post-anniversary events was the holding of the Iron Walk, where the St. Kitts Branch of the Red Cross was invited to provide first aid services, if needed, to the participants.

Giving the walkers the confidence and assistance they needed was Director of the St. Kitts Branch of Red Cross, and Sports and First Aid Coordinator, Mrs Sharon Warner-Balbosa, who drove an ambulance up and down the entire route, giving first aid assistance to a number of walkers who might have pulled a muscle or just got too tired.

“Even though we have held the walk in the past, it is getting more competitive and we are getting older,” observed Development Bank’s Manager for Human Resources Ms Danienne Brin. “The walk is not easy, so we decided this time we needed some assistance from the Red Cross. The presence of the Red Cross was very much needed and was very much appreciated.”

Ms Brin made the remarks on Thursday July 5 when she met and held discussions in her office at the bank’s headquarters on Church Street in Basseterre with the President of the St. Kitts and Nevis Red Cross Society Mr Elmo Burke, and the St. Kitts Director Mrs Sharon Warner-Balbosa whom she presented with a token of appreciation from the Development Bank.

“After that event (the walk), Ms Warner-Balbosa and I spoke briefly about getting some First Aid training for our staff, so we will talk later after the upcoming event, the bank’s Fun Day which is another post anniversary event,” said Ms Brin. “I want to invite you in as a group, to be there both to support us and to have some fun with us as we have our Fun Day which will be held on Saturday July 7 at the Frigate Bay pasture.”

Ms Brin further noted: “I was happy for the professional interaction we had (during the walk), given the short notice and I would like us to build our relations with the Red Cross from now moving forward.”

“So to build these kinds of relationships is something that we here at the St. Kitts and Nevis Red Cross would continue looking forward to,” said Mr Burke. “We welcome you and we look forward to participating in your upcoming events, and as we continue building this relationship to see how we could partner and improve the relationship going forward.”

Mrs Sharon Warner-Balbosa said that she would train staff at the Development Bank of St. Kitts and Nevis in First Aid and CPR, “in case someone comes to the bank and anything happens to them or if a member of staff is sick you know exactly what to do – they won’t panic but they would go right ahead and help the person. Building a relationship is the most important.”