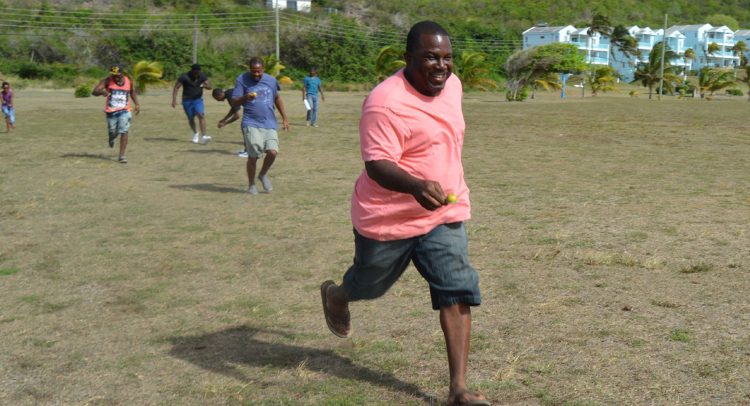 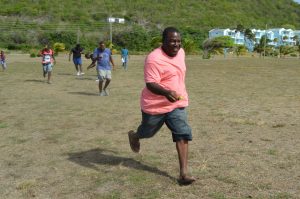 Basseterre, St. Kitts*, *July 11, 2018 (DBSKN)* — Staff members of the Development Bank of St. Kitts and Nevis (DBSKN), their family and friends, spent the day Saturday June 7 engaging themselves in sporting and fun activities on the Frigate Bay Pasture in Basseterre as part of the financial institution’s post-37th anniversary activities.

Staff members were equally divided into four groups, namely the Panthers, Jaguars, Lions and Tigers and individual participants earned points for their teams. At the end of a highly competitive day, Jaguars were declared the champions after having amassed a total of 79 points. They were followed by Panthers with 58 points, Tigers 52, and Lions 46 points   Family and friends, while they too participated, did not earn points.

The day started with a game of non-competitive cricket that was followed by competitive track events for men, women, some mixed men and women, and children. These were the 40 metres dash, 60 metres dash, lime and spoon races, sack races, and 4×15 metres relay. The final event which generated quite some interest was competition in dominoes.

Children could not have asked for better. Apart from being given the opportunity to take part in cricket and track events they also had a bouncing castle, a trampoline, and swings that were only meant for them. Events continued into early evening before everyone dispersed to go to their respective homes after dark.

According Mr Manasses Huggins, Chair of the 2018 Staff Social Committee, Development Bank’s Chief Executive Officer (CEO) Mr Lenworth Harris apart from encouraging the various participants, he also took part in a number of events. There were a number of dedicated volunteers who acted as referees, scorers, and some who provided the participants with food and drinks.

“I extend our appreciation to Flavours Restaurant who provided the food, Ms Ingrid Phipps who provided the sumptuous cook-up, and to Mr Yohance Rawlins who operated the busy bar,” said Mr Huggins. “Others who assisted in making this day a success included Mr Trevor Stapleton who was the scorer, Mr Timothy Morton who was the referee, and Ms Trevlyn Stapleton who assisted with the announcements.”

He also complemented members of the 2018 Staff Social Committee who put a lot of their time in ensuring that the event, which was the second post-37th anniversary activity after the Iron Walk held on Saturday June 29, was a success. The members are Ms Derecia Walters, Ms Amarnie Audain, Ms Leonica Prentice, Ms Karry Richards, and Ms Versahry Hanley.

Human Resources Manager, at the Development Bank of St. Kitts and Nevis, Ms Danienne Brin thanked all the staff members who participated in the event, that was also attended by Board Member Dr Dail Crawford.

“We had a fun-filled and incident free day which goes out to show that camaraderie among the Development Bank workers, both from the Head Office in Basseterre, and Branch Office in Nevis was at its highest,” said Ms Brin. “Following our recent partnership with the St. Kitts and Nevis Red Cross Society, we were graced by the presence for almost the entire day of its President Mr Elmo Burke, and St. Kitts Branch Director Mrs Sharon Warner-Balbosa.”

According to Ms Brin, the Development Bank of St. Kitts and Nevis was established by an Act of Parliament NO. 1 of 1981 and opened its doors to the public on May 22 of the same year. May 22 of this year marked the institution’s 37th anniversary, and the Sports and Fun Day was one of the post-anniversary events.

Why Do Teeth Turn Yellow?