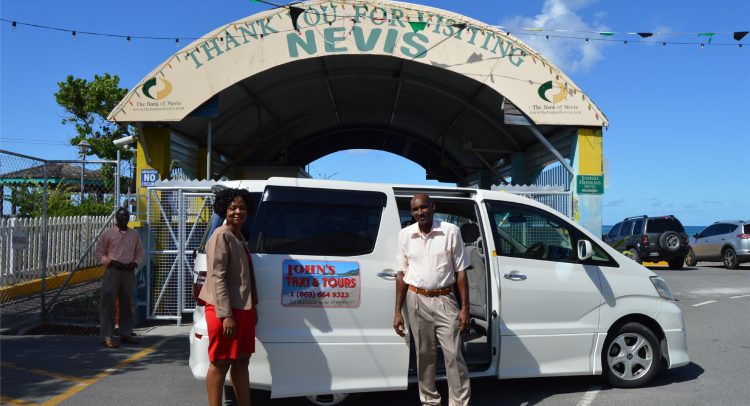 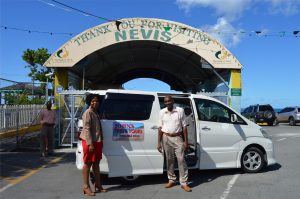 *Charlestown, Nevis*, *March 6, 2018 (DBSKN)* — Arriving at the Charlestown pier from Basseterre, one is greeted by a number of taxi operators some who carry placards. However, one of them goes a step further and calls out, ‘Welcome to Nevis, do you want to go out on an island tour?’ as he offers to take tourists on a tour of Nevis, or locals to their desired destination.

Should one decide to use him, he hands out his business card which has the words ‘Welcome to Nevis – John’s Taxi & Tours Services – Too Blessed to be Stressed’ written on it. It gives his name as John Prentice of Stoney Grove, Nevis, West Indies.

Mr John Prentice has the gift of oratory. Tourists riding on his bus get to learn not just about the geography of the 36 square miles island that is better known as the ‘Queen City’, but also its colourful history. Did you know that the famed American statesman whose portrait adorns the United States ten-dollar note, Alexander Hamilton, was born in Nevis?

Tourists, and locals alike, learn all that from Mr Prentice and he goes ahead to show them Hamilton’s birth place and the museum named after him – and much more.

But locals are told an additional story that captivates them: He talks of the Development Bank of St. Kitts and Nevis (DBSKN) and how it picked him up when he was down (financially) to where he is today. It always ends with a rider: “Go to Development Bank if you want to secure a bright economic future in this country.”

Mr John Prentice worked for over twenty years as a prison officer, and along the way he founded what has now become a powerful non-government organisation (NGO) in Nevis, the Circle of Peace Youth Programme.

He explained that his association with the Development Bank of St. Kitts and Nevis started a few years ago, after all banks would have turned him down. He had wanted a loan to help him start a business that could supplement his salary. He got a loan under Development Bank’s Personal Development Fund Programme.

“Right now Development Bank has me in a place where I never thought I would have been today and I thank God for Development Bank,” said Mr Prentice in a recent interview. “When I look at the situation where I was, to today, I would say ‘thank God for Ms Hyacinth Pemberton (Branch Manager) and all the staff in Nevis and also Mr Lenworth Harris (General Manager) and the staff in St. Kitts’.”

When he decided to go into the taxi business, this time he did not waste time going to other banks but went straight to the Development Bank of St. Kitts and Nevis where after he got the loan, he bought a van. But after the van experienced some mechanical problems later on, he returned to Development Bank and got an additional loan to buy another van.

Realising that tourism was growing in leaps and bounds thanks to the sterling efforts of the Nevis Island Administration’s Minister of Tourism the Hon Mark Brantley, who is now the Premier of Nevis, he sought to buy a bigger bus last year. The loan was approved and he has a 14-seater bus. His wife is using the van to also do taxi business on the island.

“Development Bank really helped me a lot and I thank God for that, because if it was not for them I would not have been here today,” said Mr Prentice. “I might be somewhere else. I encourage everybody who are out there who really want to start a business even the young people, and you want to start a business, and you are scared to go to banks because of what you hear, walk into the Development Bank. It is a bank where they greet you with a smile and greet you with love and a bank that you can trust.”

According to Ms Hyacinth Pemberton, Manager Nevis Branch of the Development Bank of St. Kitts and Nevis, Mr John Prentice is a very determined customer and his relationship with the bank has been getting better as the years go by.

Ms Pemberton had this to say about one of her most reliable clients: “John Prentice goes the extra mile … he has been making a major impact in the tourism industry on the island of Nevis in particular, and the Federation of St. Kitts and Nevis in general.”

When Mr John Prentice returned to the Development Bank of St. Kitts and Nevis seeking a loan to buy a 14-seater bus, he saw the Banks’s Credit Analyst in Nevis Ms Corliss Wilkinson.

“Based on past experiences with him we were able to assist,” said Ms Wilkinson. “Because of the increased demand in tourism he was having some issues where by the van was not large enough to accommodate some groups. We felt obliged to approve his loan to buy the 14-seater bus based on demands of the industry.”

In conclusion, Mr John Prentice observed that the Development Bank does not only grant loans, but it teaches its clients how to do business.

“I say thank God for Development Bank,” said Mr Prentice. “The bus is making a lot of difference now that I can be able to get a full 14 people on a tour. Tourism is growing in Nevis and I thank Premier Mark Brantley who has brought us this far with tourism. Development Bank has brought me this far that I can own a bus and other vehicles and I am able to grow as tourism in Nevis grows.