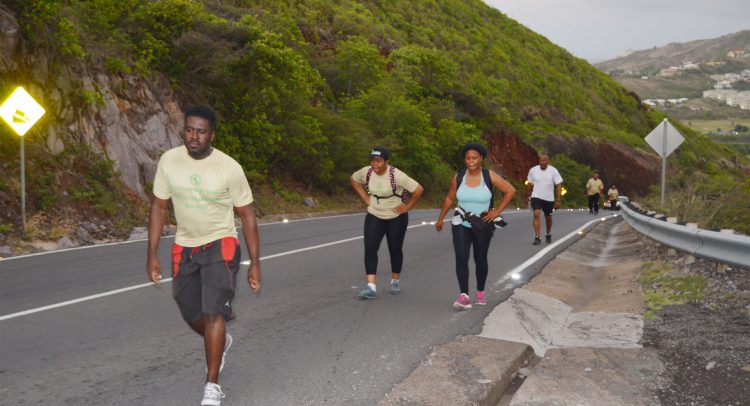 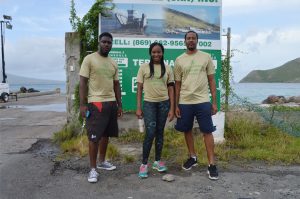 The walk started at 5:20 am after the invocation of God’s blessings by the Chief Compliance Officer Ms Marian Browne, who is herself a Lay Preacher in the St. Kitts Circuit of the Methodist Church. It took dexterity for M.I.S. Manager Mr Laurinston Matthew to beat into second place the pre-walk favourite Ms Sasha Liburd, a Nevis Branch employee on overseas study engagement but who is currently at home for the summer break.

Ms Liburd was unchallenged and led for nearly three-quarters of the way, but was overtaken by Mr Matthew at the junction of Kennedy Simmonds Highway and Mariner’s Call, after the entrance to Christophe Harbour, at 6:30 am. He arrived at Major’s Bay, Sea Bridge Terminal, at 6:54 am. He was however not the first Iron Walk finisher, but rather the first Development Bank staffer to finish, as a guest Mr Vibert Wattley was the first to finish.

A regular guest who would have taken part in the past health walks organised by the Development Bank, Ms Kimberley Phipps got to the finish point at 7:30 am, followed by Business Support Officer, Mr Manasses Huggins, one minute later. Mr Huggins therefore finished in the third position among the bank’s Directors and staff.

Apart from the Board of Directors Chairman, Mr Warren Thompson, the other Director who took part in the walk was Dr Dail Crawford. For the first time walkers had an ambulance service as Ms Sharon Warner-Balbosa, from the St. Kitts Red Cross drove it up and down the course to ensure all was well with the walkers. She only got into action when one of the walkers pulled a thigh muscle and was treated at the junction of the road that branches off to Cockleshell Bay.

Arriving at 7:17 am was Chief Executive Officer Mr Lenworth Harris, who went about congratulating those who had arrived before him while at the same time cheering on those who came after him, including the Chairman Mr Warren Thompson. Addressing the walkers after all had arrived at Major’s Bay, Mr Harris told them to consider themselves as winners. The walkers were treated to a hearty, healthy, breakfast served by Flavours Restaurant.

All the walkers, with the exception of a few guest walkers, donned T-shirts with the banks’ logo printed on them and with the writing ‘Development Bank of St. Kitts and Nevis Iron Walk’. And upon finishing the walk, all those who participated were each given a T-shirt each, with the writing: ‘Development Bank of St. Kits and Nevis, I have completed the Iron Walk’, which they proudly wore.

According to Human Resources Manager, Ms Danienne Brin, the walk was part of the bank’s post anniversary activities this year. The Development Bank of St. Kitts and Nevis was established by an Act of Parliament NO. 1 of 1981 and opened its doors to the public on May 22 of the same year. The next post anniversary event will be a Fun Day to be held on the Frigate Bay pasture on Saturday July 7, where members of the board, staff, their families and friends will have an action-packed family day.