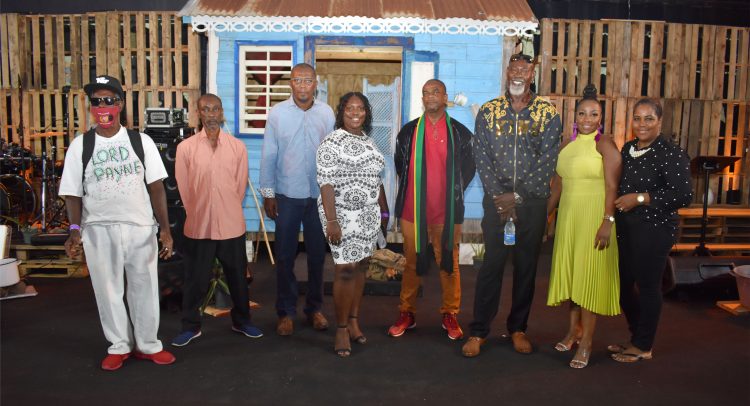 “The financial package that they gave is instrumental for the major marketing venture of this carnival towards the 50th anniversary of our National Carnival which comes into play next year,” said Mr Hodge, who is better known by his stage name King Socrates.

Mr Hodge made the remarks on Saturday November 28 at Carnival City in Basseterre at the end of Legends Calypso Tent’s second virtual series, where fifteen of nineteen calypsonians under the tent presented their songs to the general public.

“I believe that based on the sponsorship package, that Development Bank of St. Kitts and Nevis gave to the entire production, not only to myself as a sponsor of my tent individually, because they are my platinum sponsor for the Legends Calypso Tent to the tune of $10,000, but they gave $30,000 to the Carnival Committee, by that equation they are fundamental in the success of the virtual stream that is a major marketing venture towards the 50th Carnival anniversary for next year,” said King Socrates.

Enforcer (Eddison Parris) who was supposed to present his song, Leadership matters, was a no show. Others under the Legends Calypso Tent who presented on the first night on Saturday November 14, are Hot Rod (Jamal Burt), Get Real; Mighty J (Jevon Lynch), Rope; and Singing Sharon (Sharon Cannonier), Things mama used to say.

“The night was a success with vast improvements over the last two weeks,” said King Socrates. “We had more time with the band to get the songs together and so you saw the calypsonians going through their paces tonight, feeling better and getting better feedback from the audience.”

The show which was also attended by the Minister of Education, Youth, Sports and Culture, the Hon Jonel Powell, and was emceed by Mr Clement ‘Monarch’ O’Garro, and Ms Sandra Byron, better known as Sandra B, had a limited live audience unlike the first one which was held on November 14 without a live audience.

“Based on what we presented on the first round, interest was heightened to the point that people have now started to judge the two calypso tents and pick their favourites for the finals,” remarked King Socrates.

In the meantime, Marketing and Product Development Officer at the Development Bank of St. Kitts and Nevis, Ms Chantelle Rochester, said that Management and Staff of the Bank have been following the virtual activities of this year’s National Carnival and are satisfied that the international exposure for the National Carnival is quite encouraging.

“At no fault of our people who would normal come home in numbers for the National Carnival and Christmas activities, Covid-19 has put a damper on that aspect of the celebrations by our people,” said Ms Rochester. “We are proud to be the major sponsor of not only the Legends Tents, but also of the National Carnival Committee, who have risen to the occasion by streaming events virtually which has opened a new chapter in the way we serve our nationals, and friends of St. Kitts and Nevis, who live overseas.”

Main Photo: King Socrates (3rd right) with some of the calypsonians under the Legends Calypso Tent. Calypsonians from Nevis had already left by the time this picture was taken.