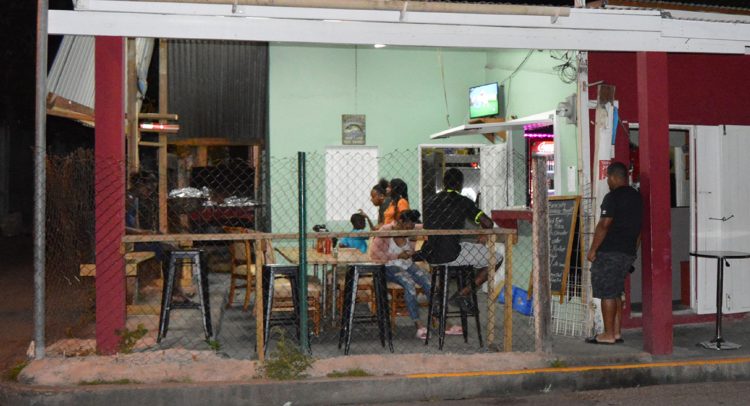 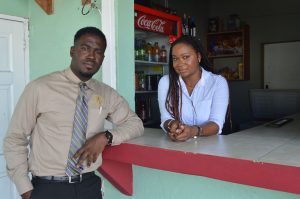 Basseterre, St. Kitts*, *June 6, 2018 (DBSKN)* — Social life in St. Kitts’ second largest town, Sandy Point, just got better. This is with the opening of a remodelled spanking G’s Bar and Grill on Main Street/Island Main Road, where locals and visitors gather to relax in the evenings for a chat and to have a bite of juicy grilled fish, and sip cold drinks while being serenaded by pulsating music coming from mounted speakers.

G’s Bar and Grill allegedly gets its name from the fact that its owner is Mr Geron Romney who has been running it for quite some time. The fact that he is also a fisherman, folks are always guaranteed to receive fresh fish when they patronise the joint. However, older folks who know better will say that they used to call it ‘Grung Gate Bar’ because on the opposite side of the road there used to be a gate at the entrance to the sports ground.

The bar has recently received a well-deserved makeover, thanks to Ms Alicha Warner who is the daughter of Mr Geron Romney. According to Ms Warner, that was made possible courtesy of her corporate partner and business advisor, the Development Bank of St. Kitts and Nevis. She didn’t just appear from out of the blue, as she has been assisting her father run the bar since she was in Grade Five.

“My Dad pretty much worked around his godmother from a wooden home and she added a little portion which was a bar, where she used to sell bread with peanut butter or bread and cheese,” notes Ms Alicha Warner. “That was years ago – she has long passed on. My dad used to come along and sell all the time with her. He started frying chicken wings, and he pretty much was there for the duration of time until she passed.”

The shop and bar closed but Ms Warner’s mother who was a cook at one of the country’s top hotels suggested to her father that since he was a good fisherman, he could add value to his product by selling it cooked. This, according to Ms Warner, would happen every Friday and the place became well known for it. Her father who was grilling the fish would also sell beverages, and she remembers coming from school and assisting by selling the drinks.

While she was in high school she suggested that they add something to the menu and they thought of souse, goat water and conch chowder.  “I always enjoyed cooking and my father said to me he was going to let me go and learn how to cook these soups by a lady in town who sold food,” remembers Ms Warner.  “I would go there on the weekends and they showed me how to cook the soups while I was still in high school. These were added on the menu when I started doing the cooking.”

When she started cooking and selling, her father allowed her to keep the profits which encouraged her. She did that until she graduated from the Sixth Form. But after leaving school, she got a job that kept her away from the family business so her mother stepped in and kept it running, while her father continued with his grilled fish portion of the business.

Seeing that her father was not getting any younger, she felt the need to revitalise the business and give it a new look but that required her to get funds to realise her dream. She applied for a business loan through a funding agency but was not successful. Not one to give up, she tried the Development Bank of St. Kitts and Nevis (DBSKN) and was successful.

“I had to create a brand new look in order to make it more for business than it was like an old wooden half rotten house and an old bar – that is after I got the loan,” said Ms Warner. “We added a new bathroom, a store room, we have expanded the kitchen, we re-roofed the entire location, and we re-walled. We bought new furniture, chairs, freezers, stoves, fryers, grills – everything.”

Ms Warner had this to say when she received a Development Bank official recently: “There is no real place in Sandy Point people can just go and hang out and have good time. We are ideally located and I said to myself, let me try and make something. We have expanded the menu, and we have added lunch with a variety of local foods – I definitely could not have made it without the assistance from the Development Bank of St. Kitts and Nevis.”

The Development Bank of St. Kitts and Nevis official, Business Support Officer Mr Manasses Huggins, explained that the revitalisation of G’s Bar and Grill was more than a business venture. He explained that from time immemorial local people have a tradition where they meet and discuss many issues affecting them both socially and economically.

“G’s Bar and Grill has always been a meeting point for locals and its revitalisation goes a long way to prove there is still need to have that traditional setup where people meet after a hard day’s work, or on the weekends,” explained Mr Huggins. “Ms Warner who has been assisting her  father run the business had a vision for the business, which will be in the interest of the people in Sandy Point.”