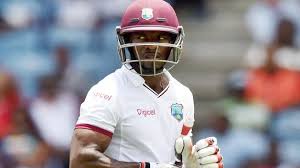 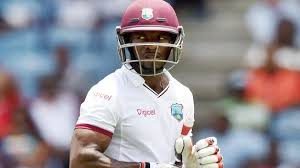 Devon Smith’s return to international cricket after a three-year hiatus was cut short by a run out decision as the West Indies reached 99 for three at the lunch interval on the opening day of the first Test against Sri Lanka on Wednesday.

The match at the Queen’s Park Oval in Trinidad is the first of a three-match series. Opening the batting alongside Kraigg Brathwaite after captain Jason Holder chose to bat first on winning the toss, the 36-year-old left-hander watched his partner depart in just the third over. Brathwaite stabbed indeterminately at a probing delivery from experienced seamer Suranga Lakmal to give wicketkeeper Niroshan Dickwella a straightforward catch and departed for three.

Smith, who last represented the regional side against England in his native Grenada in 2015, would have been especially keen to make an impact amid speculation by critics that his recall, despite a prolific regional season with the Windward Islands, was more of a backward step for a West Indies team needing to build a more competitive squad for the future.

But his ambitions were undone by sharp work from Dinesh Chandimal as the Sri Lankan captain’s throw to the wicketkeeper from midwicket found the opener just short of his ground after he was called through for a single by new batsman Kieran Powell.

Powell, the regular opening partner alongside Brathwaite throughout the 2017 season, sought to impose himself on a Sri Lankan bowling attack comprising three seamers and two spinners.

It was surprising however that no place was found in their final 11 was found for slow bowler Akila Dananjaya, who had taken eight wickets on his debut in his country’s last Test, a victory over Bangladesh in early February which clinched a 2-0 series win.

Powell and Shai Hope put on 40 for the third wicket and looked to be getting on top of the tourists’ bowlers when Lahiru Kumara struck. Keen to expose the West Indians’ vulnerability to short-pitched bowling which was quite noticeable in their last series in New Zealand six months earlier, Kumara unsettled both batsmen with his hostility on a placid pitch.

Yet it was a full-pitched delivery which accounted for Powell, the upright left-hander being bowled off the inside-edge for 38 by a ball which swung sharply back into the batsman. Hope (29 not out) and Roston

Chase (11 not out), two of the seven Barbadians in the West Indies team, navigated the remaining minutes to the lunch interval and will carry the battle into an afternoon session when Sri Lanka’s senior bowler Rangana Herath, the most successful left-arm spinner in Test history, will be expected to play a greater role.