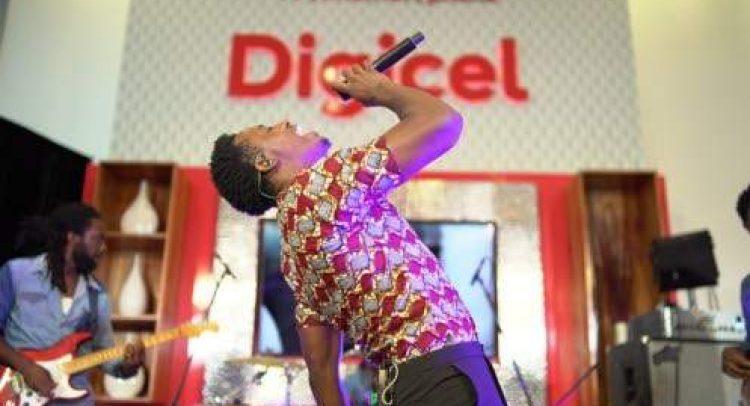 A touching duet between Tessanne Chin and her dad, Richard, almost brought the virtual house down during the Father’s Day edition of Digicel Unplugged last Sunday.

The 2013 winner of The Voice was joined by newcomer Matthew Malcolm and the always entertaining Romain Virgo for the final installment of this season of the online performance which paid tribute to fathers.

Chin, who has not been on a local stage in some time, having gotten married and given birth to her daughter a few months ago, expressed delight at the opportunity provided to showcase her vocal prowess.

“It’s so good to be up here…It’s been a while and it feels wonderful,” she told viewers of the performance aired on Digicel’s various social media platforms as she opened her set.

From the get-go she unleashed some of the original material and covers that she has become known for and it was clear that muscle memory had kicked in and the Tessanne Chin the audience had fallen in love with was ready to perform. When I’m With You, Messenger, Anything’s Possible, Underneath it All, Somebody Loves You, Lifeline, Bridge Over Troubled Waters, Everytime I Try, and Many Rivers To Cross were all delivered near perfect.

But the highpoint of the performance came when a teary-eyed Chin, overcome with emotion, introduced her father to perform alongside her. She described him as her constant support from her days singing karaoke.

The two put down a tender rendition of the 1961 Elvis Presley hit I Can’t Help Falling in Love With You. The older Chin has long since put aside his singing days, having been part of the band The Carnations which also feature Tessanne’s mother, Christine, on vocals.

She would then wrap up her presentation with her breakout hit Hideaway to make way for Virgo.

This young man continues to hone his craft and is one of the strongest performers on the local music scene.

Despite the absence of a live audience, Virgo one again proved his ability to connect on a higher level.

The young man, who came to prominence thanks to winning the Digicel’s Rising Stars televised talent competition, once again performed like it was his last reeling of his impressive catalogue for the enjoyment of his virtual audience.

Live Mi Life, People Business, Who Feels it Knows It, Best of Me, Rich In Love, Rain Is Falling, Love Doctor, When Will I See You Again, and Taking You Home all went over very well.

However, once he touched Dutty Man, the track that speaks to the atrocities of paedophiles, Virgo let his emotion hang out. Having just become a father to twin girls a few months ago, it was clear that he could not speak with a much clearer conviction when he called for the safety of children, especially at this time when due to COVID-19 they no longer have the safe haven of school and at times had to be left with unsuspecting adults who in turn prey on the youngsters.

The event opened with newcomer Matthew Malcom, a young singer with much promise. His soft rock tinged, reggae-infused ballads brought back memories of Jamaican Andru Donalds who was once a regular on the local music scene. Malcolm dropped Pretty Girl, Déjà vu and So Beautiful as part of his set.