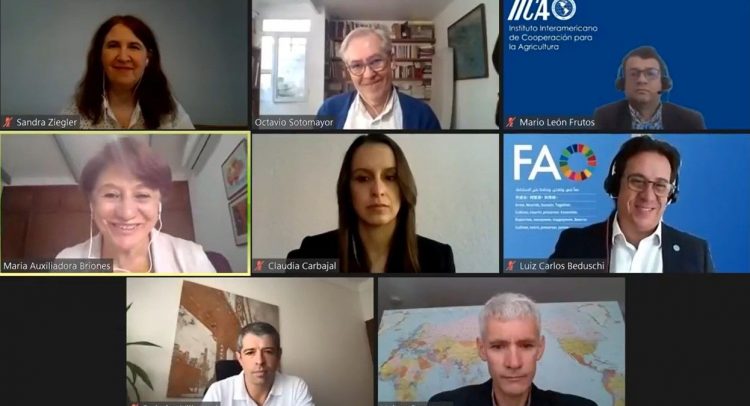 Digital tools: An opportunity for family farmers to access markets

The Covid-19 pandemic, which generated a sharp increase in digital trade, has yielded many valuable experiences in this regard, which should be identified and systematized in order to develop new strategies that provide rural dwellers in Latin America and the Caribbean with better development opportunities.

This was one of the conclusions reached during the opening session of the Cycle of Forums on Extension and Digital Trade in Family Farming, which seeks to analyze the needs, challenges and opportunities associated with digitalizing agriculture and rural territories.

A total of five forums will be held in April to discuss institutional models for providing digital technical assistance and rural extension (TARE) services in production chains, particularly in the aftermath of Covid-19.

The virtual meetings are organized by the Economic Commission for Latin America and the Caribbean (ECLAC), the Latin American Network of Rural Extension Services (RELASER), the Ministry of Agriculture, Livestock and Supply (MAPA) of Brazil, the Inter-American Institute for Cooperation on Agriculture (IICA) and the Food and Agriculture Organization of the United Nations (FAO).

The forum highlighted various strategies aimed at addressing the challenge of rural digitalization in the Americas, including IICA’s partnership with Precision Agriculture for Development (PAD), an organization that was co-founded by University of Chicago professor and winner of the 2019 Nobel Prize in Economics, Michael Kremer, to provide low-cost rural extension services through mobile phones.

Together with Brazil’s MAPA, IICA and PAD are developing a remote assistance project that will benefit up to 200,000 small-scale sheep and goat breeders and corn and bean farmers in the northeast region of the country, by enabling them to improve their production yields and increase their income.

“Through this project, knowledge and extension services are transferred to more than one million farmers; the beneficiaries, who grow 20 crops, receive weekly calls from extension agents through this system or call a toll-free line to get answers to their queries”, stated Claudia Carbajal, PAD’s Regional Director for Latin America.

For his part, Heiner Baumann, co-founder and Managing Director of PAD, highlighted the crucial importance of developing low-cost, farmer-focused approaches. “If low-cost actions can be implemented, we can reach not just thousands, but millions of farmers”, he explained.

Federico Villarreal, IICA’s Director of Technical Cooperation, stated that trade and digital extension are among the top priorities of the specialized international agency and of great importance for agriculture and rural areas in the Americas.

“Technologies have transformed how we communicate and interact, as well as the way in which we think about and participate in technology. We must strive to achieve competitiveness in different markets and focus more on demand rather than supply”, stated Villarreal.

Ziegler noted that, according to the studies, there are broad gaps and opportunities with respect to rural digitalization. “On average, 64% of rural dwellers do not have access to significant connectivity. The gender divide with respect to technology use and access, as well as the lack of digital skills, limits women’s opportunities for development”.

María Auxiliadora Briones, President of FUNICA/RELASER, considered that “the current situation forces all of us in the sector to examine the way we produce and provide services, to ensure that production is of a high quality and can supply the world with food”.

“In order to transition towards sustainable production models, investments must focus on low-cost resources. Local organizations must play an active role in promoting these investments”, he remarked.

Luiz Carlos Beduschi, Policy Officer at FAO’s Regional Office for Latin America and the Caribbean, underscored the need to bridge the gaps that exist between countries, territories and populations, because they hinder the achievement of Agriculture 4.0. “Public policymaking must be strengthened; we are approaching a time when Internet access will be just as important as access to electricity”.

The next forum, entitled “Hispanic America”, will be held on April 14 at 8 a.m. Costa Rica time.

Presentations and general information about the series of forums

Alcohol consumption is the sole cause of 85,000 deaths annually in the Americas, PAHO/WHO study finds