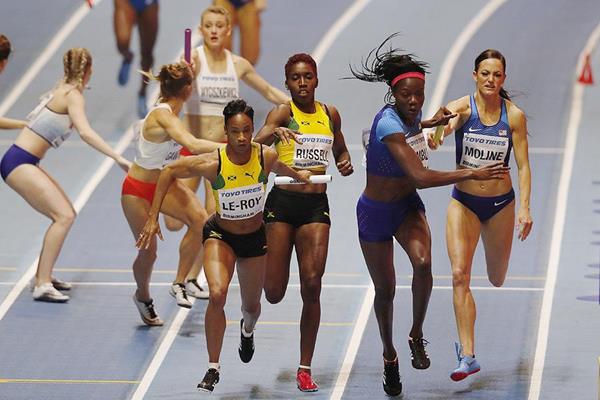 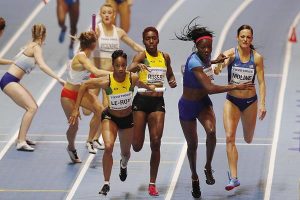 The disqualification of the women’s 4x400m relay team highlighted a disappointing end to the 17th IAAF World Indoor Championships at Arena Birmingham for the Jamaican team, as they failed to add to the two silver medals won earlier.

Jamaican sprint hurdler Ronald Levy failed to make it to the final after finishing ninth overall, finishing third in his semi-final heat in 7.62 seconds, missing the final by one-hundredths of a second.

Jamaica finished in 14th position on the medal tables with two medals, both silver, won by Danniel Thomas-Dodd, who set a new National indoors record 19.22m on Friday and triple jumper Kimberly Williams who had a personal best 14.48m on Saturday.

The women’s mile-relay team of 400m finalist Tovea Jenkins, Janieve Russell, Anatascia Le-Roy and Stephenie-Ann McPherson ran a gutsy race to finish second behind the USA in what would have been a new National record 3:24.1 seconds, but was later disqualified.

Three other teams were disqualified in Ukraine, Poland and Great Britain, but the latter were reinstated and got the bronze, while Poland were promoted to the silver medal.

Since winning a silver medal in the 4x400m in Sopot, Poland, in 2014, the Jamaican women’s team have endured back-to-back disappointments as lead off runner Patricia Hall tripped and fell in the final in Portland, Oregon, two years ago.

A protest was lodged by the Jamaican delegation yesterday against the “disqualification of their team under Rule 218.4”, but it was thrown out, and a release from the IAAF said “the Jury of Appeal examined the video evidence and rejected the Jamaican appeal”.