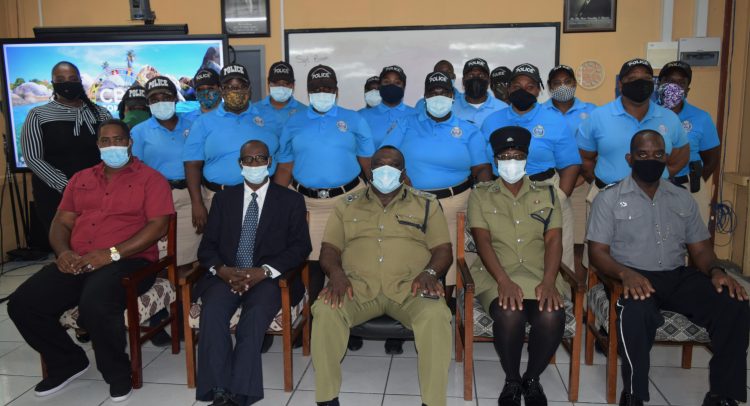 Do your best and make us proud, Commissioner of Police encourages Island Constables

At a brief closing ceremony for the two-week Island Constables refresher course, Commissioner of Police Hilroy Brandy encouraged the participants to do their best and to make their country proud.

The course was held to prepare the Island Constables for the reopening of the borders. Ordinarily, they are assigned to Tourism Prescribed Areas, however, Commissioner Brandy noted their contribution to ensuring the Regulations were enforced when they were reassigned to other areas once the borders closed.

“You are Island Constables – proud, committed and a part of what connects the tourism sector and the national security apparatus. We have seen the extent to which you provided critical support to the Police during the State of Emergency. You have been an important source of assistance,” the Commissioner told them.

He cautioned that given the new measures being implemented, their job would not be getting easier. Nonetheless, Commissioner Brandy motivated the participants to execute their duties fairly and impartially and to always be respectful to the public.

“Your country needs you to perform and perform well. Do not be afraid to do your job. Do not allow yourselves to be intimidated. When you speak, you must be able to speak with confidence, but you can only do so if you know what you are about. That is why the refresher course was so important. It served to remind you of your roles and responsibilities, as well as to ensure you were abreast of the new measures that are being put in place.”

Island Constable Donna Bradshaw noted that the course was informative and constructive and said that, “we appreciate the opportunity that was given to refresh us on the ethics of law enforcement which would mould us into better [professionals].”

Supervisor for the Island Constables, Alex Marshall, also shared his sentiment on the course and asked them to, “…embrace and focus on working towards a common goal in executing [your] duties with professionalism, respect for each other, respect for the public, and keeping the standards of the organization at a high level.”

During the two weeks, the Island Constables reviewed topics such as Taking Command and Control, the Prescribed Area Act Statutory Rules and Regulations, Ethics in Law Enforcement and Traffic Protocol. Presentations by officials from the Ministry of Health were also made.