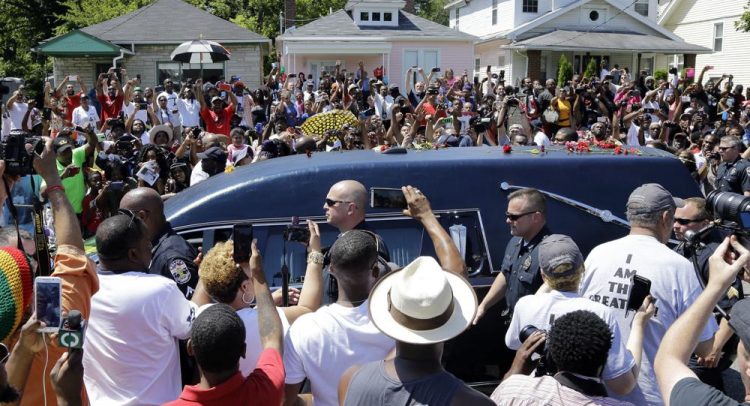 When Muhammad Ali died five years ago, his name was known worldwide. But it was home, to Louisville, Kentucky, where he returned.

From his death on June 3, 2016, to his funeral a week later, the Bluegrass community that raised him joined visitors from around the globe to celebrate the life and legacy of “The Greatest.” That week is the focus of the new documentary, “City of Ali.”

Running at just under an hour and a half, “City of Ali” shows the way Ali’s hometown united during his death. As the funeral procession snaked its way through the city to the cemetery, the streets were lined with admirers throwing flowers onto his hearse and shouting his name.

“He was always so excited to go back to Louisville and to see his people, because that’s where it all started,” recalled Ali’s daughter, Rasheda Ali. “He loved Louisville and Louisville loved him back.”

Rasheda Ali, who participated in the documentary, says learning of the events surrounding that week was special to her because it was during her “darkest hour.”

“Everything around this moment was just a big blur for me and my family,” she said in a Zoom interview with The Associated Press.

Ali may have been known to float like a butterfly and sting like a bee, but there was much more to the man. Ali used his words as effectively as he used his fists, refusing to be silenced by those who did not like what he had to say.

“My dad stood for inclusion, my dad stood for racial equality, for peace and love,” said Rasheda Ali. “Muhammad, he did not change his conviction. He stayed true to who he was.”

As one of the highest profile conscientious objectors and someone who spoke out against racial inequality, Ali remains a symbol of resistance and strength to many in Louisville.

“I definitely don’t think you can be Black in America and not be inspired by Mohammed Ali,” said Phelix Crittenden, a community organizer for Blacks Organizing Strategic Success (BOSS).

“He told my parents to watch out for me because I was going to be somebody,” Crittenden said. “I would hope that I’m proving him right and serving him justice by getting into this realm of uplifting marginalized voices.”

Though he was admired by so many, Louisville-based politician Charles Booker says Ali’s relationship with the city was nuanced.

“He would not back away from the tough conversations and I don’t believe the city always embraced him because he was going to call things out,” Booker said. “Louisville has been, and still is, one of the more segregated cities in the country, and the structural challenges that we face that led him to be such a big and critical mouthpiece for a lot of folks that don’t get heard, we’re still battling those things.”

Just last summer, Louisville made headlines after the killing of Breonna Taylor. Protests within the city and nationwide called for an investigation into the officers involved in the shooting.

“I definitely feel that people are starting to wake up,” said Crittenden, who was involved in the protests.

Crittenden feels optimistic, despite the fact that some of the same protests that were happening the year Ali died are still occurring.

“As a trans person, my life is always in danger,” Crittenden said. “I feel I was fortunate enough to be able to navigate that place where I can turn my anger into activism.”

Booker echoed Crittenden’s optimism, emphasizing the way the Louisville community has come together.

“I’m very hopeful,” Booker said. “We’re seeing folks from all corners, all walks of life, that are taking to the streets to call for justice, not only for Breonna Taylor, but for all of us.”

Rasheda Ali sees her father’s footprints in everything — from Black Lives Matter to Colin Kaepernick.

“We have an obligation as a people to continue his legacy because we want all of the sacrifices that he made to not be in vain,” she said.

Keeping his legacy alive is the goal of the Muhammad Ali Center. The Louisville museum and multicultural center educates people about Ali and teaches the core principles he lived by — confidence, conviction, dedication, respect, giving and spirituality.

To celebrate his life on the anniversary of his passing, the center, which also participated in the documentary, is holding an Ali Festival through June 13, with screenings of “City of Ali” taking place daily.

“The film reminded all of us of the importance of unity,” said Laura Douglas, the museum’s interim president and CEO. “It reminded us that it was something that was achievable, that we had done it before, and it caused us to think about replicating it again.”

FILE – The hearse carrying the body of Muhammad Ali passes in front of his boyhood home, top center, during his funeral procession in Louisville, Ky., in this Friday, June 10, 2016, file photo. Five years after his death, residents, as well as Ali’s daughter, Rasheda Ali, look back at the legacy of the boxer and the ways the people of Louisville have come together since his passing. (AP Photo/Mark Humphrey, File)