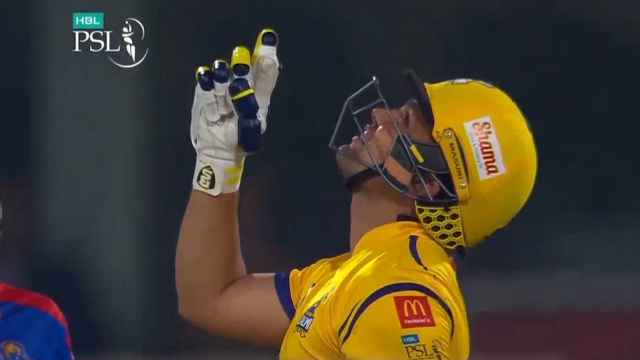 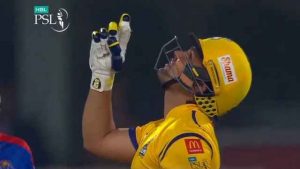 Powered by Kamran Akmal’s 27-ball 77, Peshawar Zalmi waltzed their way to their second consecutive PSL final, after suppressing a steady surge from Karachi Kings. After Peshawar posted 170 for 7 in a rain-shortened 16-overs a side contest, their seamers teamed up in disciplined fashion to ensure Karachi never outpaced them. Despite half-centuries from Joe Denly and Babar Azam, who stitched together a 117-run partnership for the second wicket, Hasan Ali, Sameen Gul and Chris Jordan choked the flow of runs at regular intervals to crush any aspirations Karachi might have had of a home final.

Needing 44 off the last two overs, Denly belted out a few big hits to take 16 runs off Hasan in the 15th over. However, 28 runs off the last over proved a little too steep, even though Wahab began with a no-ball. Karachi were left to rue their inability to accelerate. In the end, they had their strongest finisher Colin Ingram walk in a little too late.

Much of Karachi’s discomfort was also a product of some inspired seam bowling from Hasan and Gul early on. Hasan thrived on seaming the ball away from the batsmen late and finished with figures of 4-0-41-1, while Gul conceded only 20 runs from his three overs and removed opener Mukhtar Ahmed, who was brought in for his first game this season. There were backed up by an excellent support cast – Jordan, Umaid Asif and Wahab – that made Azam and Denly work hard for their runs. Captain Daren Sammy didn’t even have to employ left-arm spinner Liam Dawson on a wet day where the opposition’s spinners continually struggled to grip the ball.

That, however, wasn’t the only reason Karachi struggled after they put Peshawar into bat. Apart from stand-in captain Mohammad Amir, who finished with remarkable figures of 4-0-16-0, their bowlers fluffed their lines in the face of Akmal’s onslaught. Karachi were also undone by some listless fielding in sharp contrast to the smartness that Peshawar displayed later in the evening.

Where the match was won

In taking their time to suss the pitch out, both Peshawar and Karachi began their innings in remarkably similar fashion. Peshawar were on 29 for 0 at the end of four overs while Karachi had scored four runs fewer at the same stage. However, the difference lay in how Akmal and Peshawar took off from there and consistently amped up their scoring rate. The fifth over, bowled by Usman Khan, went for 25 runs and the over after that yielded 15, as Peshawar reached 69 at the end of six overs. They didn’t let the ball drop, as overs six to 10 produced 66 runs.

In contrast, Karachi wheezed their way to 37 runs at the end of five overs and never managed the 20-run overs that Peshawar achieved regularly. Karachi did pull it back in the backend as Peshawar only scored 50 off their last six overs, but the belligerent striking at the top had eventually given them enough cover.

The men who won it

Akmal was a doubtful starter ahead of the match with a bothersome hamstring. It was thanks to some last-minute repair work from the physio and the trainer that he was able to play. Once on the field, Akmal, like so often during this tournament, set the tempo for the rest of the batting group. He remained true to his methods, and merrily collected boundaries by clearing his front leg and giving the ball a resounding whack. Predictably, a large chunk of his runs came on the leg side, and he finished with five fours and eight sixes.

What was more impressive was the manner in which he transferred pressure on to the opposition. Sensing that his opening partner Andre Fletcher was struggling, Akmal counterpunched against Karachi’s bowlers, who had started steadily, and broke their resistance. He disoriented Usman in the fifth over with a sequence of 6,4,4,4,6,1 to open the floodgates. From thereon, it was carnage. It was only after his dismissal off the last ball of the 10th over that Karachi found some respite.

Thanks to the win, Peshawar travel to Karachi, where they will meet Islamabad United, the champions of the 2016 edition, in the final. Meanwhile, Karachi would be sorely disappointed at blowing both their shots at making the final, after finishing in the top-two at the end of the league phase.

Fresh Food Galore: How to Grow a Family-Friendly Garden in Your Own Backyard