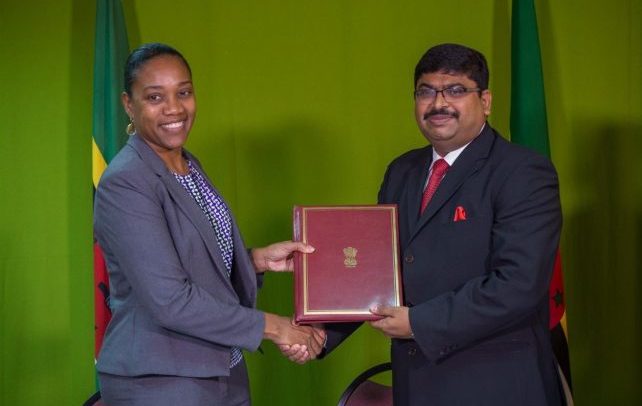 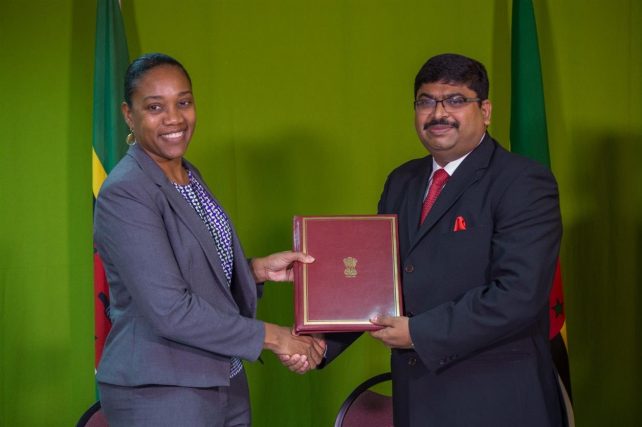 So far 46 United Nations member countries have signed the agreement, with Dominica being the latest.

“It would definitely be a step forward in your confrontation of the climate change problem that we are facing,” he said at a ceremony on Thursday morning. “The Prime Minister of Dominica has been one of the crusaders against climate change and the resolve to fight that is again signified by the signing of this agreement. For Dominica definitely, solar energy would go a long way to not only to make self-sustained efforts to fight climate change but bring changes to the day to day life of people.”

Addressing the ceremony, Foreign Affairs Minister Francine Baron, said it is well known that the high cost of energy has been holding back investments and economic growth in the Caribbean.

“In fact, the cost of energy in the Caribbean is said to be the highest in the Western Hemisphere and among the highest in the world,” she stated. “It is the desire to stem the leakage of investment resources that these high costs represent and to reduce the cost of energy to consumers that has motivated our action in the area of renewable energy.”

She noted that Dominica has been fully engaged in the design and implementation of policies to counter the high dependence on fossil fuels and significant progress has been made in the financing of the island’s geothermal initiative.

Baron said that Dominica has always focused on the idea of a viable mix of clean energy sources such as hydro, geothermal and solar.

“Through our membership of the International Solar Alliance we expect that we will make progress to the appropriate exploitation of solar energy,” she remarked. “We are fully aware of and accept some of the limitation placed by our topography on the exploitation of solar energy, however, the beauty of the ISA is the opportunity it presents for learning and sharing and we are confident that we will benefit from the experience of others in this important field.”

She stated that Dominica is committed to being the first climate resilient nation in the world and “we can, therefore, explore what opportunities are presented in using solar to becoming more resilient.”

“Dominica stands to benefit from the resources and contribution of ISA in developing our solar energy resources in a systematic and organized manner,” he said. “It can support our efforts to establish solar street lights around the country, advise on productive solar applications in agriculture for increasing farmers’ income, help in the design and implementation of solar systems to power our water systems in remote areas, among other things.”

According it its website, ISA said its mission “is to provide a dedicated platform for cooperation among solar resource-rich countries where the global community, including bilateral and multilateral organizations, corporates, industry, and other stakeholders, can make a positive contribution to assist and help achieve the common goals of increasing the use of solar energy in meeting energy needs of prospective ISA member countries in a safe, convenient, affordable, equitable and sustainable manner.”

The initiative was started by the governments of India and France.