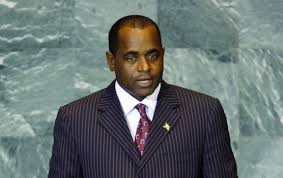 Prime Minister Roosevelt Skerrit has warned of possible legal against Dominica State College after he criticised its decision to bar students from writing exams as a result of outstanding arrears to the institution.

Skerrit said that by mid-June, his administration plans to settle “all outstanding fees that our students owe to the State College as of May 2018”.

He said the one million EC dollar (One EC dollar=US$0.37 cents) payment to the college “will clear all the fees owed by all our young people attending the state College”.

But Skerrit said the practice of the college, a state-owned institution, of not allowing students to sit their exams because of financial problems “is wrong”.

“It is morally wrong, it is ethically wrong and it is illegal and if they continue to do so I will instruct the Attorney General to sue the College on behalf of the students of Dominica.”

He said the government would hold the President of the College, Dr Donald Peters “personally liable because they should never be sending students home, not allowing them to sit their exams.

“There is my friends, no college, there is no university in the world that does that,” Skerrit added.

The College has not made any comment regarding Skerrit’s position.