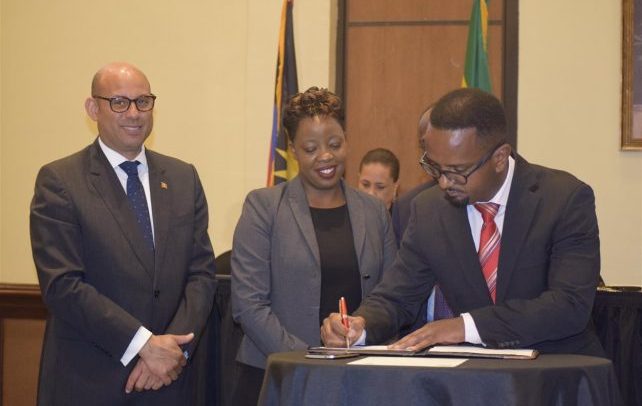 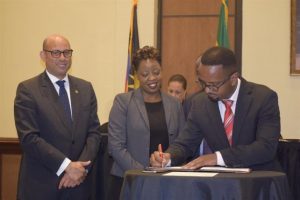 Dominica has signed an agreement, along with Antigua and Barbuda and Grenada, that will pave the way for less tedious access to climate resilience funding.

There have been complaints that the support given towards project implementation especially as it pertains to climate change is insufficient to achieve noticeable impact.

The agreement, which is called a Memorandum of Cooperation on the Green Climate Fund was signed on Thursday at the Sandals Grande Resort in Antigua and Barbuda.

She was sitting in for Joseph Issac who she says could not attend the ceremony.

Prevost said the MOC will better position Dominica and the other islands to extract funds from multilateral institutions, to recover from storms and other effects of climate change.

“The Dominica government has been in the process of establishing a new agency called the Climate Resilience Execution Agency of Dominica, (CREAD) with an aim to support the rapid implementation of climate resilience project in Dominica,” she said.

According to Prevost, “building resilience for us is going to critical in a number of areas like energy, natural resources, physical infrastructures, livelihoods and disaster preparedness.”

“Jointly with Antigua and Grenada, Dominica intends to establish the legal and institutional framework for enhancing direct access to international climate change financing,” she added.

The Eastern Caribbean, EDA project, aims to build integrated resilience of individuals and their businesses, communities and governance systems through responsive grant and loan award mechanisms, that are transparently managed through devolved decision-making, by those affected by climate change.

Meantime Antigua and Barbuda’s Health Minister Molwyn Joseph told the gathering that by signing of the agreement, Antigua and Barbuda will pursue projects on behalf of Dominica and Grenada where they can access funds with the island’s assistance and to also aid them to develop their own capacity, where they too can have access to direct funding

'We are always missing you': Torn apart by violence, Rohingya families connect through letters

Cruise Tourism History to be made on Monday