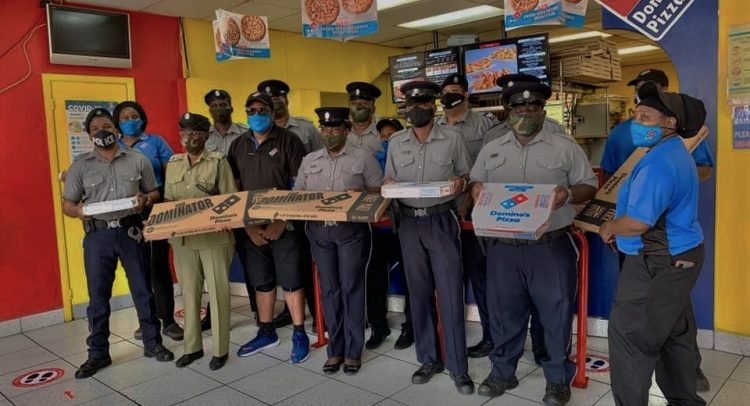 The Country Manager for Domino’s Pizza disclosed details of a partnership between the company and the Explorers Clubs.

In September, Country Manager for Domino’s Pizza, Arthur Martin, called in on the popular radio programme, “Policing With You”, which airs live weekly on ZIZ radio, to laud the National Intervention Team (NIT) who were guests at the time. In an interview this week, Mr. Martin, who is a regular listener to the programme, said that he was impressed with the Team for the wide array of activities they are involved in with club members. The NIT is comprised of Police Officers. He spoke highly of the work the Team has been doing with children and he noted, on air, that he would like to extend his support to the club.

“I was listening to the radio show on the morning and I heard the Explorers team speaking and I was impressed with what they do and a lot of things I didn’t know that they were involved with like helping kids with homework and their academic activities, the after school activities and the weekend activities…,” he stated.

Mr. Martin held discussions sometime after with Founder and Coordinator of the Explorers, Inspector Rosemary Isles-Joseph and her team to explore ways in which Domino’s Pizza could provide assistance to the effort. He said that in his conversation with the NIT, they came up with a few initiatives.

He suggested the clubs engage in fundraising activities and one of the ways in which it could be done was by selling slices of pizza in their various communities. The clubs would be sold large one-topping pizzas at a reduced price to improve the profit that could be made. Another area identified was to extend the lunch-time special – in which small pizzas are sold to all students in uniform at a discounted price – to the Explorers. However, for the Explorers, the offer will not be limited to just lunch time, nor would they be required to be in a school uniform. Once Explorers present their club photo identification, they can enjoy the discount at any time. The Domino’s Pizza Country Manager added that the company will also support the group’s activities in other ways whenever possible.

He believes that supporting a cause of this magnitude will have far-reaching effects in shaping and changing the future of the younger generation.

“It goes a long way because it starts from a tender age…these days in order for us to create an environment which could also create a better future for the country, you have to start from these tender ages and if you can pull those kids in from these ages, get them interested and work on them, you could see where the country would be in the next ten years…they would emerge with a different mindset, rather than the idle mindset, crime and what not so it’s a good thing to mold them and have them heading in the right direction,” Mr. Martin said.

There are twelve (12) active Explorers Clubs with a combined membership of over 1,000 youth. A Police Officer is assigned to each group as a Club Leader. Club meetings are held weekly.