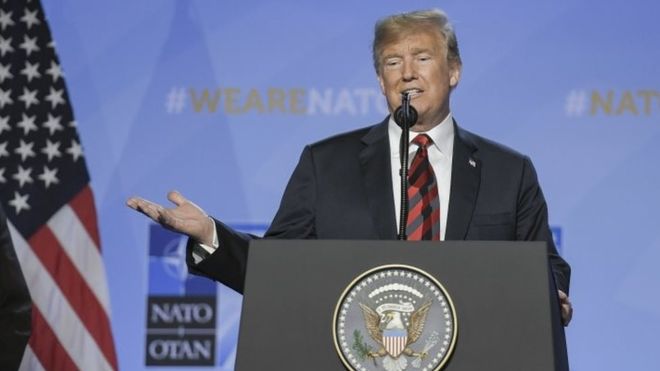 Donald Trump ‘fine’ with UK protests ahead of visit US President Donald Trump has said he is “fine” about the protests expected to be held during his UK visit, saying Britons “like me a lot”.

Speaking at the Nato summit before travelling to the UK, Mr Trump referred to Britain as a “pretty hot spot right now with a lot of resignations”.

He will meet Theresa May later, who wants a post-Brexit trade deal – days after he said the UK was in “turmoil”.

Extra security has been put in place to police a number of planned protests.

Mr Trump, who will also spend time with the Queen during his two-day working visit, said: “I think they like me a lot in the UK; I think they agree with me on immigration…

“You see what’s going on throughout the world with immigration… I think that’s why Brexit happened.”

He said the British people “voted to break it up, so I imagine that’s what they’ll do” and “Brexit is Brexit”.

Mr Trump’s visit comes as Mrs May publishes a White Paper setting out a blueprint for the UK’s relations with the EU.

Earlier this week Mr Trump said it was “up to the people” whether she stayed on after two cabinet ministers resigned within hours over her Brexit policy.

He added he had “always liked” Boris Johnson, who quit as foreign secretary.

Mrs May said the visit would be an opportunity to boost trade links and strengthen co-operation on security.

But she also warned Mr Trump not to ignore the “malign behaviour” of Russia when he meets Vladimir Putin in Helsinki next week.

Mr Trump had joked earlier this week that his meeting with the Russian leader “may be the easiest” part of his European trip.

Along with trade and security links, Downing Street said the other key areas to be discussed between the two leaders included Brexit and the Middle East.

Ahead of Mr Trump’s visit, Mrs May said that when the UK leaves the European Union “there will be no alliance more important in the years ahead”.

Downing Street insisted Mrs May welcomed Mr Trump’s decision to “engage” with the Russian leader in the Finnish capital on Monday.

However No 10 also made clear that she expected him to raise issues like the Salisbury nerve agent attack on former spy Sergei Skripal and his daughter, Yulia.

Ross University expands its footprint in St. Kitts and Nevis with the opening of its research and pathology building