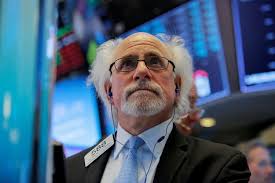 The Dow Jones Industrial Average fell more than 250 points, or 1 percent, on Wednesday as industrial stocks tumbled over growing fears of a trade war with China after President Donald Trump sought to impose fresh tariffs.

Trump is looking to levy tariffs on up to $60 billion of Chinese imports, targeting the technology, telecom and apparel sectors, sources told Reuters on Tuesday.

The Trump administration is pressing China to cut its trade surplus with the United States by $100 billion, the White House said Wednesday.

The S&P industrial stocks were again the worst hit, falling 1.02 percent. Boeing tumbled 3.5 percent, leading the losers and wiping off 70 points from the Dow Industrials.

The uncertainty over the latest news was weighing on stocks, said Paul Nolte, portfolio manager at Kingsview Asset Management in Chicago.

“Given the rearrangement that he has made to his cabinet … it’s being read as a lot more protectionist now than it was two weeks ago.”

Trump has already imposed tariffs on steel and aluminum imports as well as solar panels and washing machines, sparking threats of retaliation from some trade partners.

Concerns about a trade war have also been fanned by uncertainty in the White House after the exit of Gary Cohn, a strong free trade proponent and sacking of Secretary of State Rex Tillerson, a moderate, on Tuesday.

The Nasdaq Composite was up 0.01 percent at 7,511.56, with a bump in technology stocks helping the index.

Also weighing on sentiment was data that showed U.S. retail sales fell for a third straight month in February, pointing to a slowdown in economic growth in the first quarter.

But the data helped cool concerns of the Federal Reserve raising interest rates at a faster pace in 2018.

Among gainers, Ford rose 3.5 percent after Morgan Stanley double-upgraded the stock to “overweight” and raised its earnings estimate on the automaker.