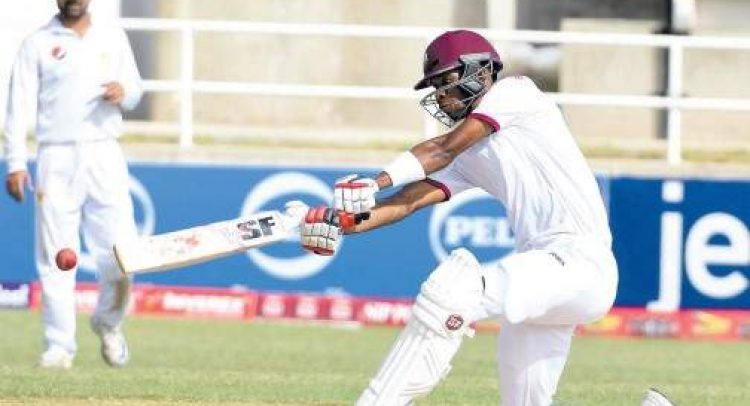 West Indies wicketkeeper Shane Dowrich has set personal batting milestones as part of his overall plan to help the Caribbean side to its first Test series victory on English soil in 32 years.

Both Dowrich and his teammate, fellow Barbadian Roston Chase, are drawing inspiration from their performances against England in the Caribbean last year.

England are to host West Indies in three behind-closed-doors Test matches, with the first scheduled to get underway on July 8 at The Ageas Bowl in Southampton.

The home side, rated fourth in the world Test rankings, will start as the favourite against eighth-ranked West Indies.

“I would like to leave England with a Test hundred and also I’m looking forward to averaging over 40 in this series, but my main goal is to help the team to win. Whatever I have to do to make the team win is what I’m looking to do,” Dowrich said Sunday during a virtual press conference from the team’s current base in Manchester, England.

The diminutive 28-year-old, who has scored three Test centuries in 31 matches at an average of 30.08, was woeful with the bat on the 2017 tour to England. He managed only 24 runs, including a best of 14, in six innings as West Indies lost the series 1-2.

But Dowrich was in sparkling form in the 2019 series, and was integral to the home team’s shocking 2-1 win to reclaim the Wisden Trophy.

The nimble and compact wicketkeeper/batsman struck an unbeaten hundred and ended the series with an average of 51.

Repeating the triumph in English conditions will be no easy task, especially with the home side boasting one of the finest bowling attacks in the world.

“Obviously, the expectation is always to win. Once we go through the process and continue to do the things we did well in the Caribbean we will definitely come up with a good performance in the series,” Dowrich told reporters.

Chase, 28, also harbours hope that West Indies can pull off another surprise.

“It was a wonderful memory…it was a great series,” he said during Saturday’s press conference in reference to the 2019 triumph.

The technically sound middle order batsman, whose off spin bowling handed him eight wickets in the second innings as West Indies romped to a 381-run win in the opening Test, said that contest set the tone for the rest of the series.

“That match, in my opinion, was probably the best Test match that I played in with this current side. We won 2-1, but that match was the start. We started well and continued into the second match. It’s good to look back on that and have that going into this series,” he explained.

Aside from his heroics with the ball during the home series, Chase was also good with the bat, notching a century and averaging 40.

Chase has five career hundreds in 32 Tests at 31.38, but like Dowrich he struggled as a batsman three years ago in England, mustering 80 runs –with a top score of 30 — in six innings.

On the wicketkeeping front, Dowrich said he has been working to get acclimatised to English conditions, especially with the notorious late movement of the ball after it has passed the batsman.

“It has been tough. The last time I was here I found it a bit difficult. I’ve just been spending time out in the middle, getting used to the atmosphere. The more I get out there and the more I get to practise, I’ll be better able to manage when it comes game time,” the glove man explained.

The West Indies Test tour of England was originally set to run from May to June but was postponed due to the novel coronavirus, which causes the COVID-19 disease.

The three matches will form cricket’s first-ever biosecure Test series. Biosecure measures are designed to reduce the risk of transmission of infectious diseases.

The West Indies 25-man squad, which arrived in England on June 9, is scheduled to stage two internal warm-up matches before the opening Test. The first, a three-day encounter, is to begin today.

The second and third Test matches are to be staged at Old Trafford in Manchester, starting July 16 and 24, respectively. Both Test match venues have hotels on site.

Players from both teams will be required to avoid members of the public and follow physical distancing guidelines while on tour.