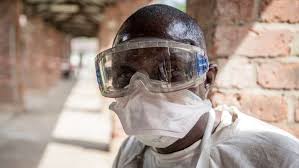 An Ebola outbreak in the Democratic Republic of Congo is not yet an international public health emergency, the World Health Organization has said.

It said there was a “strong reason to believe that the outbreak can be brought under control”.

At least 45 people are believed to have been infected in the current outbreak and 25 deaths are being investigated.

Cases emerged in a rural area with one now confirmed in the north-western city of Mbandaka.

The city of about one million people is a transport hub on the River Congo, prompting fears that the virus could now spread further, threatening the capital Kinshasa and surrounding countries.

Ebola is an infectious illness that causes internal bleeding and often proves fatal.

It can spread rapidly through contact with small amounts of bodily fluid, and its early flu-like symptoms are not always obvious.

What did WHO conclude?

At an emergency meeting, WHO experts said that “the conditions for a Public Health Emergency of International Concern (PHEIC) have not currently been met”.

Had they decided otherwise, a larger response to the outbreak would have been triggered.

Although Ebola had already spread to an urban area, the experts said they believed the outbreak could be brought under control.

They also stressed that it was “particularly important there should be no international travel or trade restrictions”.

The WHO said it had identified more than 500 people who had potentially come into contact with Ebola patients in the country.

It said they would be closely monitored for symptoms of the disease and were likely to be among the first to be given an Ebola vaccine, which – although still in the experimental stage – proved effective during a trial.

The WHO said some health workers had become infected with Ebola.

WHO has previously admitted that it was too slow to respond to a deadly Ebola outbreak in West Africa from 2014-2016 that killed more than 11,000 people.