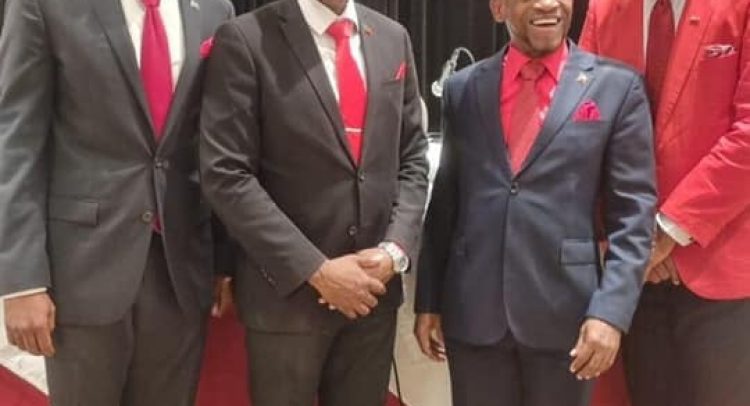 In his New Year’s message, in his capacity as the Leader of Her Majesty’s Loyal Opposition, Dr Douglas noted that for two months, the November 28th 2021 SKNLP leadership elections, captured the attention and imagination of St Kitts and Nevis and its citizens.

“It did so with the most open, transparent, and democratic process of political leadership elections in the history of our country. This exercise allowed for over 400 delegates to elect its new political leadership being ably led by Comrade Dr Terrance Drew at the helm along with Comrades Dr Geoffrey Hanley and Mr. Konris Maynard as Deputy Leaders,” said Dr Douglas.

Expressing confidence that the SKNLP ” truly together in 2022 will begin to write the next chapter of a St. Kitts Nevis Labour Party Government,” Dr Douglas said St Kitts and Nevis “can look forward to a Party revived, refreshed, and strengthened in its 90th year of existence, ready to take on the mantle of leading our twin-island nation into its next ascent.

“He implored the membership of the SKNLP, a great and unique political movement, “can only do so together, each for the other, so that we do not waste the political opportunities that await us in the upcoming year.”

Dr Douglas said the St Kitts-Nevis Labour party has always lived by its motto “for the good that we can do”. We have ensured that over the years our priority is to always take care of the most vulnerable in our society.

He said it was necessary that the SKNLP continue lending the hand of kindness that the Labour Party has always shown to the people of St Kitts and Nevis.

Noting that he continues to serve and lead Her Majesty’s Loyal Opposition in the Federal Parliament, Dr Douglas said it is a duty “I will continue to exercise with dedication as I continue to partner with Honourable Dr. Geoffrey Hanley, Parliamentary Representative for St. Christopher #1, East Basseterre, and our charming and capable Senator Dr Joyelle Clarke. I promise you that we will never cease to promote the cause of ordinary men and women of this country as we do our part, together, to create a most resilient and prosperous St Kitts and Nevis.”

First elected to the St Kitts and Nevis National Assembly in March 1989 by the residents of St Christopher 6 (Newton Ground to Harris’), the seven-term parliamentarian was appointed Prime Minister and led the SKNLP four-term Cabinet from 1995 to 2015. He served as Leader of the Opposition from 1989 to 1995 and has been serving in that capacity from 2015.

Dr Douglas has said he is proud of his stewardship of 32 years as the National Political Leader of 90-year-old the St Kitts-Nevis Labour Party (SKNLP) from 1989 to 2021.

Why was Socrates absent during Astro’s crowning?