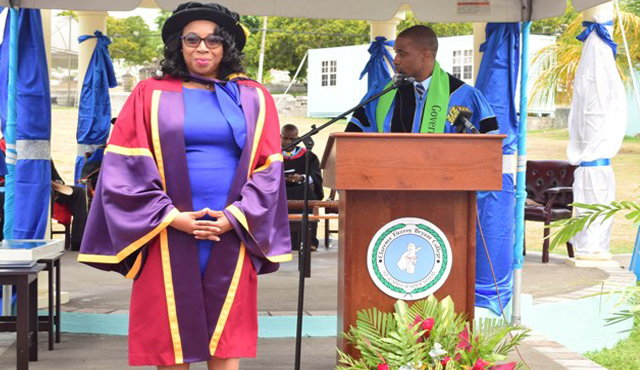 DR. JACQUELINE AUSTIN SWORN IN AS FOURTH PRESIDENT OF THE CFBC

Basseterre, St. Kitts, June 27, 2019 (SKNIS): Wednesday, June 26, was a historic day for the Clarence Fitzroy Bryant College (CFBC), as Barbados-born Dr. Jacqueline Austin was sworn in as the fourth president, during a ceremony held at the premier tertiary institution in St. Kitts and Nevis.

Deputy Prime Minister and Minister of Education, the Honourable Shawn Richards, described the ceremony as relevant because it was organized not only to officially welcome her, but also to inaugurate her as the fourth president of the institution. This, he said, is a very important process for the leadership of CFBC.

“The installation of a college president is a significant event because it gives a public indication of the leadership and direction of the institution,” said Deputy Prime Minister Richards. “Securing a president for the college is a very involved and consultative process. It involves the interview of applicants by the Clarence Fitzroy Bryant Board and the subsequent engagement of the candidates by the faculty and other constituents of the college…

Such an approach is necessary because of the awareness that the new president has to be able to share the vision for the college with the different teams of persons with whom he or she would be working with,” he added.

Dr. Austin is described as a leader in higher learning, who most recently served as a consultant to the Caribbean Development Bank, working across the region on Technical and Vocational Education and Training (TVET) focused initiatives.

“This, I believe has positioned her to hit the ground running as she embraces the mantle for the forward, upward thrust of this institution,” said Deputy Prime Minister Richards.

A release from the Education Media Unit (EMU) stated that Dr. Austin is regarded as an extraordinarily effective consultant, planner and advocate for higher education, who has worked with the Caribbean Development Bank and the European Union. A graduate of the University of Leicester and the University of Manchester, Dr. Austin was the former Director of the Barbados Community College.

Meghan and Harry to visit South Africa, Angola and Malawi